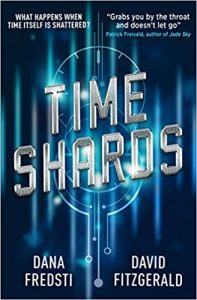 Time Shards, a new novel co- written by David Fitzgerald and Dana Fredsti, delivers a fresh take on the concept of time travel. While Fredsti has a history in exploring apocalyptic wastelands, this is something of new territory for atheist activist Fitzgerald. When 600 years of Earth’s history is suddenly scrambled via “the event” the life of our main protagonist, Amber Richardson will never be the same again. The book explores the concept that time travel is linear, which means that there’s no timey wimey, wibbly wobbly nonsense here. Time has a past, a present and a future. In an effort to repair itself after the event, time is returned in the wrong order, so dinosaurs end up wandering around modern day London on one page, while Amber fresh off a comic-con date finds herself wandering around Roman Britannia, circa 1993, almost as if they were film sets, lined up next to each other.

Obvious struggles and realizations aside, Amber comes across various characters from different time zones which in itself was interesting enough.  A strong modern woman, seeing how Amber has to deal with a World War 2 soldier intent on protecting her, made for interesting reading as did her interactions with Roman warrior Cam, both of which enforce the books strong and very relevant side messages.

Suspending belief is something you have to do to enjoy even the best science fiction has to offer and this is no different. Professor Michio Kaku would have a field day, pulling this apart if he so wished. But that’s okay. Once you’ve abandoned your disbelief, you can immerse yourself in some wonderful storytelling, without being baffled by science and the need to over explain the multitude of minutia that governs it. After all, do you think H.G Wells and James Cameron really cared about the butterfly effect or the grandfather paradox? Exactly. And neither should you.  So get reading… Chris Andrews