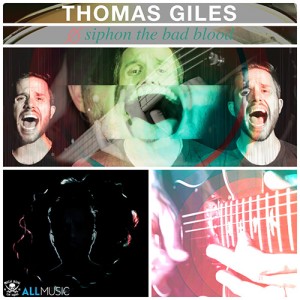 THOMAS GILES, the solo project from Between the Buried and Me front man, Tommy Rogers, is set to release “Modern Noise” on November 21st, 2014. Today, All Music is set to debut a brand new music video from the album! “Siphon the Bad Blood” was shot last month with Rogers in Los Angeles and features colorful visuals from throughout the “Modern Noise” album art. The abstract video is streaming exclusively at AllMusic.com. Additionally, an interview with Tommy has been published on the site. Watch “Siphon the Bad Blood” now at AllMusic.com HERE.

Recently, “I Appear Disappear,” was released via GuitarWorld.com. The song builds up into an exceptionally catchy chorus, before ending with an extended and incredibly tasty guitar solo from Between the Buried and Me guitarist Paul Waggoner. Listen to “I Appear Disappear” now on GuitarWorld.com HERE. Visit metalblade.com/thomasgiles to listen to the previously released track, “Mutilated World,” and visit the Thomas Giles youtube channel for exclusive studio videos from the album tracking process youtube.com/thomasgilesmusic. Subscribe to be the first to hear about new entries in the “Creating Modern Noise” video series.

What is “Modern Noise”? The title is merely a statement that reflects what they are creating: their take on the modern rock sound. Tommy Roger explains the title and music: “This record was an outcome of me creating songs while not wanting to over evaluate the music. I wanted to record things that naturally came to me and because of this, the record feels like an accurate extension of myself. I took a more rock approach and really focused on writing simple yet dynamic songs. Lyrically, I feel it’s a great mix of storytelling and personal experience. “Modern Noise” is basically just saying this is my current noise on the earth. We all are here for a short amount of time and the noise we make is our memory.”

Fans of Tommy’s work with Between the Buried and Me, as well as fans who steer clear of anything metal related, will find plenty to enjoy here as this is nothing short of a well written, genuine, and intensely passionate modern rock/progressive album. This is Tommy’s take on music, or as he says: “Music is always Modern Noise. I’m just a person in current time trying to create something somewhat new.”