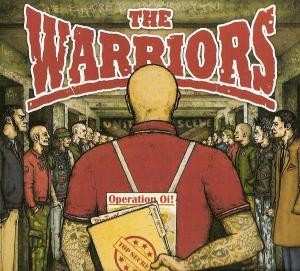 I don’t know how they do it, but over recent years The Warriors have managed to put out solid releases with absolute consistency, and this new album “Operation Oi!” is no exception. Arising from the ashes of the original Last Resort, Saxby and his crew beefed up their street rock sound and have trod their path for many a year now, sticking faithfully to their musical cause. There is no mellowing going on, in fact the lyrics are possibly angrier than ever before, with Saxby almost spitting the words out down the microphone. They have kept the musical blueprint they basically invented some 25 years ago, keeping things straight ahead with a solid beat, chucking in some hard rocking and classic punk sounds and blistering guitar work when the songs call for it. There is a sense of urgency throughout as the band rarely drops the tempo, keeping you on your toes. As well as the twelve album tracks the CD version contains new versions of the old faves “King Of The Jungle” and “Warriors Come Out To Play”. Tom Chapman