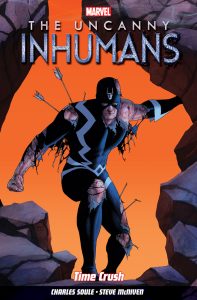 Time is a funny old thing. It dictates everything and answers to nothing (except gravity, and even then in only the most extreme of circumstances); it is one of only two,(the other being space) universal constants, both of which have provided, and continue to provide, an endless source of speculation and imagination for the Marvel Universe. Given that the Inhuman’s origin lies out among the stars in the Kree Empire, it was only a matter of time before their story became hopelessly intertwined with the second constant.  Which it does in Time Crush, when Black Bolt strikes a one sided bargain with Kang to save his son, Ahura’s life from what is, or rather at this point in the Marvel Universe was, to come.  But when you make a deal with the devil, you should always prepare for the worst, and when Kang is involved, the worst is always the least you should expect. Using Ahura as a weapon to destabilize the Inhuman timeline, Kang sets out to wipe the citizens of Attilan from history and so Black Bolt, following a strained reunion with his former queen Medusa, sets out save his people and his son from the machinations of Kang. In a tale that takes them from the beginning of the Inhuman relationship with Terrigen, to the atom bomb tests of the sixties, to the present day and back again, Black Bolt and his allies (including Johnny Storm, Beast, Reader, Triton and Medusa among others) find themselves battling for the past, present and future of the Inhumans.

Time Crush isn’t just an adrenaline fuelled, time hopping adventure that sends tingles of nervous excitement down your spine and makes the hairs on the back of your arms stand on end. Oh no, there’s far more to this story than that, as Charles Soule’s explores the nature of familial bonds, the complexities of the parent child dynamic, how generation relationships evolve and the way they’re moulded, shaped and defined by both sides of the developmental coin, nurture and genetics.  Set against a background of explosions, chronological combat and Black Bolt unleashing hell on those who oppose him, all of which is given gloriously detailed life by McNiven, Lee and Peterson, Time Lash serves up all of the four colour mayhem you could ever want from a book. But its plot also rides on an undercurrent of melancholy, as the kinship, affairs of the heart and friendships that bind the characters together are irrevocably altered by, and in the wake, of the fight against Kang. Inhumanly good… Tim Mass Movement