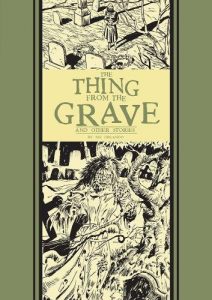 “I’m going to lock you in this room and set fire to the cabin. There are no windows, so you can’t escape.”

Well, that told her, didn’t it? But don’t worry, Laura, Jim will save you – yes, dead Jim, the one who promised to come help wherever he was. The same Jim Bill killed so he could get in your pants. But when you found out what Bill had done – oh, dear. Oh, also, for those innocent days when one could turn out a story called ‘The Thing From The Grave’ and no one would laugh in your face. No irony here; no parody, no retro pastiche, just – aaarrgh! – THE THING FROM THE GRAVE!

And here it is, folks – seeing the light of day for the first time since it was published over 60 years ago – the centrepiece of The Thing From The Grave & Other Stories Illustrated By Joe Orlando. The latest offering from Fantagraphics Book’s EC Library follows much the same format as other titles in the series – a more than value-for-money collection of assorted tales from various EC horror titles bookended by intro, biographies and afterword. Given that many of the stories herein feature shambling or rotting corpses who meet/have met their fate in various circumstances, you get pretty much what it says on the tin. There are, however, exceptions: the famous drug-addiction tale, ‘The Monkey’, and an adaption of Ray Bradbury’s tragedy, ‘The Lake’. Slightly jarring is the inclusion of a number – roughly a fifth of the book – of Orlando’s humorous work for Mad’s sister magazine, Panic, fine if you’re purchasing this tome for the artist alone, perhaps less so if what you’re after is the usual gore-fest. You’d have thought there would have been a sufficiency of horror to nudge the publication of Orlando’s lighter material into a separate collection, but as is so often the case with the EC Library, chunks of that have already been published in other, differently themed volumes.

Still, no real complaints – the scripting here comes from such luminaries as Al Feldstein, Gardner Fox and Bill Gaines, while the bookending background info is lovingly delivered by long-time fans and experts Fred Von Bernewitz, S.C. Ringgenberg and Ted White. In the two hundred and twenty six pages that await, you’ll be certain to find some yarns that stick with you, and for the record mine are ‘Who’s Next?’, ‘Midnight Mess’ and ‘Pleasant Screams’. Hell – who can resist a title like that?

As the Crypt Keeper would say – though it might draw a few strange glances these days – “Keep A Stiff.” Mike Wild