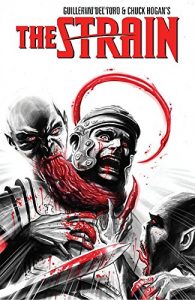 Possessing only poor man’s televisual receiving equipment – ie, no cable or satellite – I have never seen the TV series, The Strain. Nor have I read the trilogy of novels on which it is based. Guillermo del Toro and Chuck Hogan’s variation on a vampire theme is therefore that most unusual of things for your humble reviewer – a total unknown.

A quick dib into the intrawub produces what I need to know before I get my teeth (sorry) into The Strain: Mister Quinlan Vampire Hunter, the five-issue collected graphic novel of the comic book from Dark Horse. I find it’s about a particulary nasty breed of vampires and – surprise – the people who hunt them, and that Quinlan, the main protagonist of this graphic novel at least, is one of the most popular characters in its mythos, played on the televisual stage – irrelevantly but interestingly – by Spooks’ own Rupert Penry-Jones.

A sort of ghoulies and ghosties thing, then.

Seriously, as there were three novels and the TV series made it to four seasons, I’m sure it’s all a whole lot more complicated than that, as these things always are, and I must confess to having had my appetite whetted. The machinations promised remind me somewhat of the tragically short-lived Channel 4 series, Ultraviolet.

No such machinations here, however, being as this is – and as it says on the tin – The Origin Of Quinlan! For it, we’re way back in Roman times where we witness Quinlan’s birth and subsequent progression from boy to man to … well, inevitably, vampire hater and hunter. We witness the causes at the hands of the ‘Master’ vampire, Thrax, and the fate of Quinlan’s beloved, Tasa. It’s a passable enough tale – Quinlan – here known as Quintus – sold into slavery, becoming gladiator, becoming centurion – written possibly a little by-the-numbers by David Lapham. In truth I might have enjoyed it and have been invested more if I didn’t know less than bugger all about the character of Quinlan as he is today. Still, with suitably bloody artwork from Edgar Salazar and others, I’m sure this’ll be appreciated by fans of both the books and TV series who may be in search of a little backstory for their favourite White Warrior. Nothing outstanding, but nor is it a strain. Mike Wild