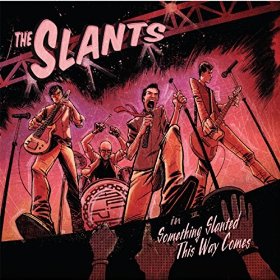 It took The Slants several years and a Federal Circuit Court appearance to earn the right to trademark their band’s name. During this time they continued to tour/play shows and even managed to release an album. Now that this particular battle is over they have returned with Something Slanted This Way Comes, the first new music from the band in four years. Enduring line-up changes and judicial problems have done nothing to dull the passion and fire of Chinatown Dance Rock displayed by our four heroes.

None of the songs on this album are new. Not a single one was written since 2012’s The Yellow Album. These are new versions of old favorites highlighting the new line-up and their new found joy of striking a blow for justice. These songs aren’t a batch of re-recorded tunes, they’re reworked, revitalized versions of older tracks. Don’t expect a lazy bunch of half baked ideas, instead go in knowing that you’re going to hear echoes of the past, the brilliance of the present and, perhaps, a glimpse of the future. Ken Shima’s a better singer than his predecessor and his delivery of each lyric brings a new energy, a new feel, to the songs. Tyler’s drumming, Simon’s bass, Joe’s guitar…all bring something new to this album, something different for us to experience. Now we can only stare in awe at this band that was already one of our favorites, knowing that they’re more than heroes for political justice, they’re rock stars. Jim Dodge