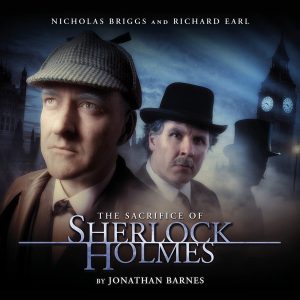 ‘The dead my friends…the dead are soon to walk amongst us. And they are legion.’

Clearly not one for preamble, Jonathan Barnes immediately throws his audience into the middle of a pre-titles séance.  This bodes well. I wouldn’t consider myself a fan of the world’s most famous sociopathic detective…but dead walking among us?  Bring it on!

And so begins The Sacrifice of Sherlock Holmes, the final instalment in a series of Big Finish audio adventures spanning the career of Holmes from young detective to the man presented to us now: here it’s 1921 and a rheumatic, elderly Holmes has been reunited with erstwhile partner John Watson at the funeral of Mycroft Holmes.  Insisting his older brother’s death was not the result of old age but of murder carried out by The Society, Sherlock vows to get his revenge. But was this murder, or does the retired detective, terrified of old age and the fast pace of the twentieth century, just need to prove he still has the skills to pay the bills?

Barnes’ use of language is authentically Edwardian in its rhythm and choice of words; his prose drips with imagery and atmosphere. He manages to navigate a murky middle ground between Conan Doyle’s original works and the BBC’s postmodern television resurrection, blending elements of old with new. The relationship between Watson and Holmes nods towards the homoerotic subtext that Superwholock fans love so much; at the funeral, for instance, a single look between the two old friends is framed as ‘the only sustenance both need’. But this is most definitely NOT of the contemporary world we currently see Sherlock Holmes inhabiting on screen. And with no copyright issues from Conan Doyle’s estate, it cheers my inner nerd to see that stories can flirt with ideas such as the ability to see into the future, shape shifting and, of course, those walking dead types.

The entire cast shine here, but special mention must go to Nicholas Briggs who plays a beautifully mercurial Holmes oscillating wildly between bouts of age-induced existential angst and the speed and brilliance of his long-forgotten youth. I also very much enjoyed Richard Earl’s take on Watson as a troubled man burdened with past decisions. I’ve always considered Dr Watson to be no more than a cipher, but Barnes’s story makes him a much more rounded and layered character.

I do have a couple of (tiny) niggles. The fact that Sherlock Holmes is not as young as he once was and that he’s something of a Victorian fish swimming in twentieth century waters is perhaps hammered home a little too heavily, and it is made very clear that Watson’s (third) wife is merely a pale imitation of the much loved Mary Watson with her every interaction, but don’t let that put you off. Though I may be more Christie than Conan Doyle, I’ve got to say that I thoroughly enjoyed spending an afternoon listening to this. And as a newcomer to the series (who is very late to the party), I will certainly be going through this particular back-catalogue to listen to earlier adventures.  Bex Ferriday