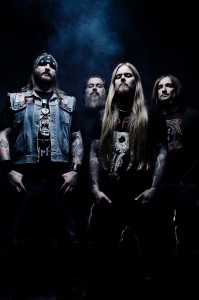 With the mighty Hammerfest 2015 soon to be upon us, we decided to catch up with a few bands for pre-event advice. What better way to start than with the UK’s own metalheads ORANGE GOBLIN. Mark Freebase caught up with frontman Ben Ward.

So, Hammerfest… again Ben! It’s not your first time is it?
It’s not, I think this is our second time at Hammerfest but we’ve also done a couple of Hard Rock Hell Festivals too so we’re no strangers to the holiday camp experience. I can’t remember exactly which years we’ve played as it’s all a bur now but I remember playing with the likes of Clutch and Black Label Society in the past. I think maybe Anthrax did one as well?

How does it feel to play certain festivals more than once; to be invited back? …the above mentioned, Download, Bloodstock, to name just three…
It’s great! We always feel privileged to play these type of events, particularly in our home country where we’ve become a bit of an institution over the last 20 years. I think people know what they’re going to get with Orange Goblin and I’d like to think we’re a perfect band for this type of festival. We want to party just as much as the audience!

Now with all the touring you’ve put in over the last two years, you must start to recognise some faces in the crowd… errrrm I mean standing at the bar!
Of course, we’re like a modern day version of Status Quo and are on first name terms with all 27 of our fans!

How will you pick your set-list to keep it interesting for the regular OG fans, and for those who may be expecting the better-known songs?
We always like to play a bit of something from every album so I’m sure this will be no different. Obviously we have a relatively new album to promote so we’ll be crow barring a few new ones in as well. It gets harder to choose as time goes on, we now have 8 albums worth of material and everybody wants to hear something different but that also helps keep it fresh and exciting for us rather than playing the same stuff over and over again.

What’s Orange Goblin’s plans after Hammerfest and for the rest of the year?
Festivals, lots and lots of festivals across Europe. We’ve pretty much been on the road non-stop for the last 2 years so this year we intend to stay at home a bit more and just do a lot of bigger festivals. We have Desertfest, Hellfest, Bloodstock as well as lots of big shows on mainland Europe with the likes of Metallica, Kiss and Judas Priest. It’s going to be a very exciting summer!

Anyone that sees you wandering around the site in Wales… should they approach you? What could they expect from a man of your stature? …and what would you expect from them?

I like to think that Orange Goblin are a very approachable band. We always have time to stop and talk to the fans so yeah, if you see me, let’s go and have a beer and a chat. Most people that we meet are always very cool and knowledgeable about stuff so it’s good to hang out but occasionally there are weakeners that you just have to get away from!!

So… Some up Hammerfest 2015 in one sentence please mate…
A very fun, drunken heavy metal festival at a holiday camp in Wales.

‘Back From The Abyss’ is available now from Candlelight Records.