After a lengthy hiatus, break up, or whatever you prefer to call it… UK rockers Angels Or Kings are establishing their presence once again and after a powerful performance at Firefest, it can only be expected they will blow the roof off Hammerfest AOR United. Guitarist Tony Bell gave us the lowdown…
words: Mark Freebase

With the likes of ‘Firefest’ under your belts, how does ‘Hammerfest AOR United’ compare?
“Hi Mark… Firefest was brilliant, yet a bit scary. We’d been away for over 20 years and we were playing in front of a great crowd who know their Melodic Rock music. The support we got from them was amazing. We were Firefest regulars anyway as fans, so it was an absolute honour to win the unsigned band competition to open the festival. We made a lot of new friends.

Hammerfest will be different because the “Kings Of Nowhere” album has been out for a few months now. A lot of people have bought it and have given us some very positive feedback. This time people know the songs and a lot of people have told me that they are choosing to come and see us on the Thursday night. We feel very privileged to have been invited.

Is there a buzz surrounding this niche festival from what you have heard? Have any friends in bands told you much about it? Have Angels Or Kings come close to playing it before?
Yeah, definitely. It’s a big day in the Melodic Rock calendar, especially now that Firefest won’t be happening this year. These music fans are fiercely loyal to Melodic Rock music, and if you put your heart into what you do they recognise it immediately. The support has been amazing.
We’ve not had the opportunity to be invited to play these festivals before because we split up in 1992 and didn’t start writing together again for 20 years, but that makes the sense of anticipation even stronger. 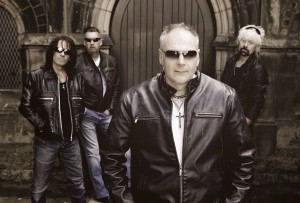 What’s the intentions of Angels Or Kings when you hit the stage?
Just to enjoy the occasion and soak up being part of it. The fact is we love the songs we have written and we just want to get them across as powerful as possible. Baz can work an audience and when he’s on form he is on fire. I’m sure he will get the crowd behind us straight away, and we will all be buzzing to deliver some great songs as best we can.

So what’s the prime slot to appear during the weekend?
We are second on the bill before the headliner so it’s more than we could have asked for!

Will the set-list be focus mainly around ‘Kings Of Nowhere’?
Yes, all of the songs will be off the “Kings Of Nowhere” album. We all agreed early on that we would not be going back to songs that are over 20 years old. The album is what people are listening to so we will be playing the songs from the album.

I think we’ve got around 50 minutes on stage. We are still working out the set list so we are not sure yet. No surprises as yet…! 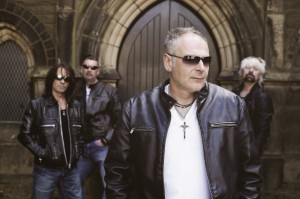 Is there any particular bands you hope to be sandwiched between during your set…? Any musician friends you’ll be knocking around with while you are there?
No, not really. There’s some great bands playing so it will be brilliant whoever we are sandwiched between. I hope to be having a beer with everyone! Haha.

I’ve not seen Jules (White Widdow) for a while. We always have a catch up and a beer when we get together so I’m sure we’ll carry on where we left off! The lads from In Faith, Vinny Burns (Dare), Rob Evans, Jeff Price, Sue Birbeck and Steve Price from ARFM, Paul and Dawn from Platinum Rock Radio, Chris Nelson ARFM…if they are there, I’ll be having a beer with them.

Then there’s the fans that are going…I’ve met a lot of them over the last year and am proud to call a lot of them friends. I’ll be having a beer with them too! Haha.

‘Kings Of Nowhere’ is out now on AOR Heaven