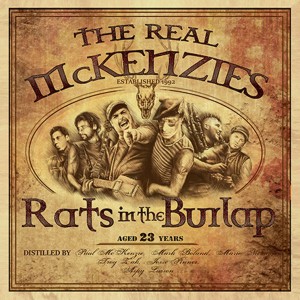 The Real McKenzies – Rats In The Burlap LP/ CD (Fat Wreck)
The celt-punks are back with their ninth studio album, and they show no signs of slowing down. opener “Wha Saw The 42nd” is both their declaration of intent for this record yet might also be slightly misleading. This pipe-driven traditional sounding song is well delivered but also exactly what you would expect from a folk-punk band. As you delve deeper into the album it’s clear that the McKenzies have so much more to offer, and are not afraid to add a country twang or a jazzy swagger to the sound, but the backbone of this record is solid punk rock. Tracks like “Who’d A Thought” or “Fields Of Inverness” are stupidly catchy punk tunes where the guitars come to the fore, and the pipes blend into the overall sound, adding character and depth. And so with all these different weapons in their arsenal, Real Mckenzies go to town on you, creating an album that is highly varied and never boring. The one thing that really struck me on here is the sheer quality of Paul McKenzie’s voice, he has power and passion and not just by the bottle but by the bucketful. Lyrically it’s a mix of the serious and less so, with a couple of anthems to life on the road which with these guys is always colourful. The record finished with a lament to friends sadly passed and “Dead Or Alive ” is a very strong and emotional album finisher. At the start of the review I mentioned how the opening song might mislead, and that is to say that even if celt-punk is not your thing, this record is worth delving into as ultimately it is just as the cover suggests – a finely distilled, well aged punk rock album. Tom Chapman