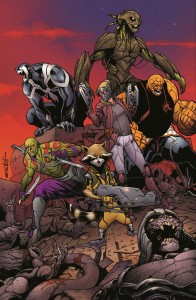 This October, blast off into the stratosphere as the recharged group of galactic guardians explode into the All-New, All-Different Marvel Universe in GUARDIANS OF THE GALAXY #1! Coming to you from legendary comic writer Brian Michael Bendis (Invincible Iron Man) and rising star artist Valerio Schiti (New Avengers) comes a team unlike any youve seen before! Eight months have passed since the end of Secret Wars, and Peter Quill didnt waste any time abandoning the Guardians and taking the throne as ruler of Spartax. And Rocket didnt waste any time taking his place as leader of the Guardians of the Galaxy either! Leading a team comprised of Kitty Pryde (now known as Star-Lady), Drax, Groot, Venom and newcomer Ben Grimm, the everlovin blue-eyed Thing  Rocket and the Guardians are out to show that even though Secret Wars may be over, the galaxy still needs guarding. Strap in and hold on this October for their bombastic new debut in GUARDIANS OF THE GALAXY #1!