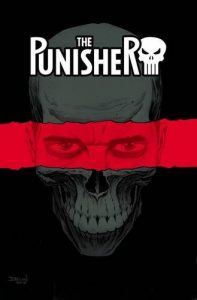 As much as comic fandom loves superheroes, it loves anti-heroes more. That’s why Frank Miller’s Batman in full bastard mode Dark Knight took the four colour world by storm and why Alan Moore’s Watchmen is regarded as a seminal title. Because everybody loves a bad boy, or girl, who gets the job done by doing things that the clean cut, square jawed, good guys would never dream of doing.  And that’s why Frank Castle, the semi-psychotic vigilante who wages a one man war against criminals, is so beloved. Frank isn’t restrained by the system or morality, his dedication to his on-going mission is unwavering and all-encompassing, he answers violence with increasing degrees of violence and shoots first and doesn’t bother asking questions later.  He is the embodiment of the anti-hero and is at his absolute best when he’s catapulted straight into the thick of the action in fast moving, bullet ridden tales that revolve around his taking the fight to the baddies and not when he’s bogged down in a myriad of sub-plots or having his haunted psyche and horrific past examined in microscopic detail. Becky Cloonan knows this all too well and in On the Road she distils her rapidly evolving story of The Punisher, ripping through and dismantling in gloriously grizzly fashion a drug syndicate producing and supplying a street level super-solider serum to any and all low-level hoodlums and gangs into a straight forward, no nonsense brutal and uncompromising miasma of murderous ferocity and destruction.

However, that doesn’t mean that Cloonan’s story doesn’t have a sting or two in its viscera stained pages, it does. Namely the vicious new adversary, with a penchant for taking trophies from his victims, Face, who pops into Frank’s crosshairs and looks set to become a long-term thorn in the vigilante’s side, the former comrade who links Frank to the narcotics crew and the mutual admiration that develops between him the DEA agent on his and his targets trail. Liberally sprinkling her story with dark humour, Becky Cloonan’s tale maintains a rapid rate of fire from beginning to end and gets better and better as the body count increases. Steve Dillon’s hyper-detailed and graphic art is the perfect partner for Cloonan, as it drenches her high octane story in blood, guts, gore and more and helps set The Punisher On the Road to his inevitable victory. Lock and load folks, its punishment time… Tim Cundle