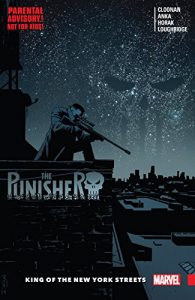 Whoever said “you can never go home” was way off target when they offered the world that particular pearl of wisdom. Frank Castle, taking a leaf out of Peter Parker’s book and following his recent sojourn to a less urban locale, is, in King of the New York Streets, back in the Big Apple doing what he does best. Just in case you don’t know what that is because you’ve been hiding out in the woods somewhere doing the Ted Kaczynski survivalist thing and prepping for an as yet non-existent apocalypse, it mainly* involves Frank dispensing his patented brand of hyper-violent justice to any and all members of the criminal fraternity who cross his path. And as he’s back on the mean streets** of New York, in this latest collection of one shots and a single two part story, his “job” keeps him busier than Hugh Hefner’s hands at a Playboy mansion pool party.

Seeing , and reading about, the Punisher at work is – on some weird primal and animalistic level that amplifies the endorphins produced by the remaining parts of the primitive mammalian brain- one of the most satisfying elements of comic fandom. It’s wish fulfilment and revenge fantasy writ large, served up in the safety of your own home, the coffee shop or wherever it is you go to get your four colour fix and even though some part of me knows I shouldn’t; I love it. The Punisher is the comic equivalent of the extra spoonful of sugar in your black coffee, the illicit Boston Crème donut that you sneak when you think no-one is looking and James Coburn’s Flint films.  That is, it’s one of life’s secret, almost illicit pleasures and King of theNew York Streets plunges Frank straight back into the concrete jungle, setting him free to do the voodoo that only he can do.

Whether he’s taking down a gang of thieves who strike under the cover of a city-wide blackout, reclaiming his property and showing an abusive father the error of his ways or solving the mystery of a subway serial killer, in King of the New York Streets no crime or bad guy is too big or small to escape the Punisher’s reach. And he makes sure that each and every single one of them that he catches up with gets his full and undivided attention; which, as you probably already know, doesn’t end well for anyone caught in his sights. That includes his old adversary, Face, who in a double issue tale that closes the book (for now) on the EMC arc in true theatrical fashion, returns from the land of the nearly dead to try to ruin the Punisher’s day. But as Face discovers to his chagrin, it takes a lot more than a psychotic, super-serum fuelled mercenary to spoil Frank’s good time, which is probably the last thing going through his mind when he’s  handed a one way ticket to the Punishers’ happy place.

This time around, Becky Cloonan keeps things light (well, as light as things every get in the brutal, uncompromising world of Frank Castle) and snappy and let’s Frank be Frank in a series of stories that flow faster than the cyclical rate of an A-10’s nose cannon. King of  the New York Streets is a Punisher book for Punisher fans, and Matt Horak and Kris Anka’s noir, pulp favoured, cartoonish artwork extenuates the dark pathos and humour that lies at the heart of Frank Castle’s single minded personal mission but at the same time doesn’t detract from the horror and carnage that his one-man war on malfeasance is soaked in. It’s all about Frank doing what Frank does best, nothing more, nothing less. And it is, as Punisher stories almost always are, fantastic.  Light ‘em up Frank, light ‘em up… Tim Cundle

*Yeah, it’s actually ALL about Frank killing lots of ne’er do wells. That’s what he does. He kills criminals.

**Which are nowhere near as mean as they used to be, but you know, all things considered they’re still pretty mean.