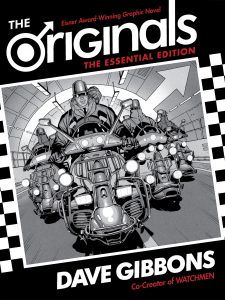 Clearly, for writer Dave Gibbons, the effect of growing up in the mod era of the 1960’s and seeing the gadgetry and shiny chrome of the scooters, combined with the fashion and most essentially the music, has left a mark as The Originals, whilst based in the future and containing elements of a culture that still exists, is essentially his love letter to that particular time period.

From the off, Gibbons reminds us what being a Mod is all about. It not about Herman’s Hermits, Austin Powers and bloody psychedelia. It was all about Lambrettas, Italian clothes, music and fighting amongst other things and all those elements are present and correct; only in the future, the mods are known as The Originals and the rockers are known as The Dirt. The futurised London backdrop, is just that -a backdrop. But it does serve to give the book an element of familiarity. The story is a classic one that holds connotations in any era; it’s a simple tale of two mates who’ve fallen on hard times but dream of owning a hover scooter and a sharp suit and joining their idols at all the best clubs. But as the old saying goes, “be careful what you wish for…” and soon our boys are in too deep, relationships suffer, cracks appear, dangerous enemies are made and suddenly it’s not looking so glamorous anymore. And no Mod story would be complete without a carve up on the beach and The Originals doesn’t disappoint on that front either.

Gibbons use of retro/minimalistic artwork, works well and once again takes his audience back to 60’s and the use of white narration on black background, ups the suspense levels of the book and his usage of retro looking flyers and vinyl covers is particularly enjoyable. Perhaps music and physical media isn’t dead in the future and Dave Gibbons knows something that the rest of us don’t?

The co-creator of the legendary Watchmen draws on his knowledge of those halcyon days, and utilizes his talent for writing engaging and enjoyable sci-fi as well as his penchant for the super violent, to create something quite unique. The Quadrophenia references are obvious, but there’s a lot more than that going on here. Think Goodfellas on hover scooters...Chris Andrews