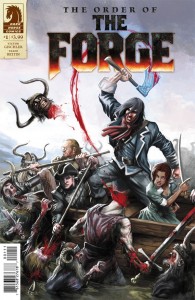 The Order Of The Forge # 1 – Victor Gischler, Tazio Bettin & Juan Ferreyra (Dark Horse)
Dark Horse’s latest shiny new offering, “The Order Of The Forge” features none other than a young George Washington coming of age as it’s patriotic protagonist Being GW he is prone to see and do things his way, of which, like all good troubled young upstarts with ideas above their station, his father disapproves of. As a result, George does not so much have Daddy issues, as he has the entire collection in hardback limited edition. For those of you who can relate to this, please get in touch via the MM editor. I’ll kill your dad if you kill mine. It will be the perfect crime. Untraceable. But once again, I digress.

As a result of this , Lil’ George takes an axe to his old man’s cherished cherry tree ( Hey Freud, come here, what do you make of this?) which, during the hacking  transforms into a big ole totem pole ( Yeah, I thought so) , complete with glow in the dark eyes, which zaps the young GW (Okay, that’s enough Freud, it’s just getting creepy now)

Well who woulda thunk it??

Flash forward to Philadelphia six months later and young Georgie boy is rooming with Paul Revere- Another heavily iconized proto-yank. I’m not entirely sure of his place in Murrika’s fledgling mythology is, but suffice to say he is Revere by name and revered by nature, and is a particular favourite of tea party types- make of that what you will.  The two are serving as footmen on some moneyed estate when some posh English bint, who is inexplicably remarkably well tanned shows up and, like all good limeys, is irresistibly drawn to Americans being rude.

Enter Ben Franklin stage left. Or brothel left, for that is where he is found. At this point I think historical accuracy is being sacrificed for the sake of a good yarn, or at least a brave attempt at one- add on sinister uncles,  occult artefacts, revolutionary conspiracies  and shamanic possession   and we certainly have all the right ingredients here.  Whilst the premise of historical characters in wild adventures is something of a familiar trope these days, there’s a bit of teen comedy about this one too, sort of ‘American Pie’ meets ‘National Treasure’, but bugger all like that really. Whether this all gels together remains to be seen, but it would certainly be worth picking up the next few issues to find out. And it’ll also be worth picking them up to see which of the founding fathers bangs the Limey bird.  At worst it would be pretty entertaining fratboy take on the Oedipus complex, at best it could end up as the next revision of the history books. Now that really would be a good yarn. Don Doomcock