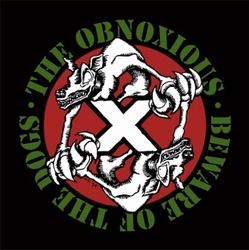 The Obnoxious – Beware Of The Dogs CD (WTF Records)
OK just to clarify, this isn’t the UK punk band that I reviewed last month, The Obnoxious are a hardcore band from Rotterdam, Netherlands. It’s funny that when Martijn recently reviewed From The Heart (also released by WTF records), he mentioned a revival of the so-called “Eurocore” style, as that is exactly the vibe that I get from this Dutch outfit. Bands like Punishable Act, Ryker’s, Hard Resistance, Barcode and many more took the core elements of the old school US hardcore sound but added a distinctive European stamp to it, and they thrilled audiences over the continent and well beyond for a good number of years. Those bands fell into the background as newer musical styles came to the fore, but recently there has been quite a revival of bands playing this style. The Obnoxious are a prime example of this – hard and powerful without sounding metal, they fuse a NY influence with the faster sounds of bands like DRI or Suicidal Tendencies. I did mention that the music isn’t overly metal but the vocals often remind me of Phil Rind from Sacred Reich, and that is a pretty big compliment! The Obnoxious know to mix up the tempo with some mid-past groovers next to the neck breakers and that helps keep the album varied and interesting. Definitely worth checking out if you like any of the bands mentioned and love the no-nonsense hardcore style. Tom Chapman