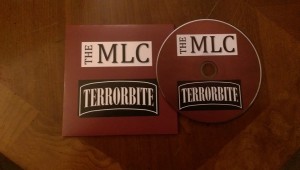 First of all apologies to the bands – this should have been reviewed ages ago but got misplaced during my wife’s decorating frenzy and has only just been found;  and sadly it now seems as if Terrorbite are calling it a day; but I’m getting ahead of myself… In an interesting quirk both MLC and Terrorbite are made up of the same members with a slight amount of tweaking in who plays what. You might think that would cause both bands to sound somewhat similar and although there’s certainly a few  crossover points, in general MLC have a lighter almost pub/punk rock sound (think Lurkers/Eddie and the Hotrods) whereas Terrorbite have a more metal sound (W.A.S.P. Sabbath, Accept etc.)Personally I lean more towards the heavier material of Terrorbite, particularly the (brain) crunching ‘Zombieland’ but that’s just me. As I said it now appears the Terrorbite half of this schizophrenic musical experiment have been mothballed for them to concentrate on MLC  which is a shame, but maybe we haven’t heard the last of Terrorbite… Five tracks by each band, available from their Facebook page.  Ian Pickens