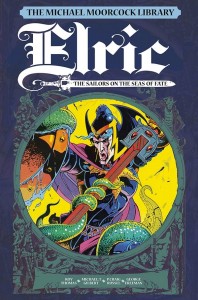 Sword and Sorcery (or if you’re slightly more literary minded, High Fantasy) fiction like most things, for me at least, is governed by the rule of three. Primarily, as far as the genre is concerned, three authors whose work defined, and continues to define, the medium in its purest and most exciting form. It has always been, and I daresay always will be, dominated by Robert E. Howard, Fritz Leiber and Michael Moorcock.  However, much as I love Leiber’s novels, it was always Howard and Moorcock who captured my imagination, and let it soar through exotic worlds, ancient history and far-off places; and while the former will forever be identified with Conan, it’s with the incredible adventures of Elric of Melnibone, who is arguably his most famous creation, that I always associate Michael Moorcock.

‘The Sailor on the Seas of Fate’ finally brings back into print Roy Thomas’ comic book adaption of Moorcock’s second Elric novel, and as in the previous collected volume, ‘Elric of Melnibone’; it perfectly captures the spirit and essence of the exiled Emperor. Having left his homeland to explore the Young Kingdoms, ‘The Sailor…” finds Elric rescued from persecution and recruited to help save the multi-verse from the schemes and machinations of strange sorcerous beings, before being forced to confront his own ancestors and exploring the chaos bound and ruined origins of his own people. Moorcock’s novel introduced the idea of Elric being a single facet of the Eternal Champion; and in this book he meets three more of his ‘brothers’ as they sail to their destiny on the oceans that separate worlds and dimensions in – another of his creator’s reoccurring themes – the Multi-Verse. Inventive and captivating in equal measure, Thomas magnificently transcribed and channelled Moorcock’s prosaic tales, while Gilbert and Freeman’s haunting, ethereal and dreamlike artwork encapsulated the incredibly detailed and imaginative worlds through which Elric drifted. Brutal, violent, but a melancholic undercurrent that tugs at the reader’s heartstrings, the doomed wanderings of the displaced King are every bit as powerful in this medium as they are in the original. Like the hero upon whose life it’s based, this book really is eternal. Tremendous… Tim Mass Movement