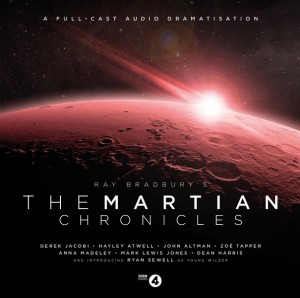 As one of the most famous authors in this history of fantastical fiction, Ray Bradbury’s catalogue of work and thus the scale of his imagination was, and is, beyond compare. Although he was prolific writer who ventured into many genres, Bradbury will best be remembered for his Science Fiction stories and novels. One of his most famous books, ‘The Martian Chronicles’, is the story of mankind’s colonisation of Mars and the disasters and eventual triumph that follow in its wake.  Written as a collection of interconnected tales that relate the events surrounding the vast undertaking from a number of perspectives rather than a single narrative, it’s both a powerful critique of the worst aspects of human nature and a celebration of the best attributes of the species that remains as valid and vital today as it did when it first appeared in the early fifties.

Richard Kurti and Bev Doyle faced an enormous task in attempting to condense the stories into a single hour long drama, but for the most part, they succeeded in spectacular fashion. Focussing on the experiences of Captain Wilder and his interactions, and relationships with the crew members (Spender, Hathaway and Parkhill) he originally ventured to Mars with, this version of Bradbury’s story also gives the main character a history that wasn’t present in the original, and an overall plot-arc that acts a functional backdrop which binds the different stories together. Spender’s story, in which she (yeah, he has become a she in the B7 adaptation) goes “native” in Bradbury’s allegory of the first American settlers and their encounters with the indigenous people, while Hathaway’s story explores the nature of loneliness and the lengths a man will go to in order to escape it and Parkhill’s tale, which has little in common with ‘The Off Season’ (the short story that first revealed his fate), but follows a similar central idea, revolving around the whims of fortune and the fickle nature of luck. While the ending has been altered to fit Wilder’s new backstory, it does incorporate the spirt, and plot, of Bradbury’s curious, hope filled finale.

As I’ve already said, for the most part it’s a well written, interesting adaptation of a classic novel, which only falls flat in certain places (primarily the omission of the Martian’s from Parkhill’s story) due to, what I’d imagine, were financial constraints and timing. After all, sand ships and somehow realising them for radio would probably have sucked the entire budget dry.  The performances, especially Derek Jacobi as Wilder and Hayley Atwell as Spender, are fantastic, and both the plot and pacing of the drama are balanced, involving and thought provoking and even though it lacks the emotional range of the novel, it’s still a splendid way to while away an hour. So sit back, relax and enjoy…  Tim Mass Movement