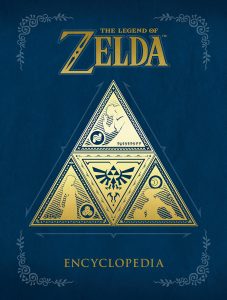 Anyone who’s played any of The Legend of Zelda games, will be well aware of its size and have marveled at just how in depth the world goes. Since its inception in 1986, to its hugely popular mid 90’s Nintendo 64 version right through to the current day, The Legend of Zelda mythology has just grown bigger and bigger. Thankfully Dark Horse has seen fit to compile all this into what must be considered the Zelda Bible to its fans.

Of course being so successful, Zelda also crossed over to other media platforms, which are also detailed in The Legend Of Zelda Encyclopedia and in incredible detail. Every character, town and village in the game as well as their secrets and relevance are all beautifully captured in this 328 page book. Enemies and items, potions to poes (reoccurring enemies) are explored, giving useful insight for gamers to pore over, as well as an interesting expansion of the lore touched upon in Hyrule Historia. There’s concept art, screen caps, maps, and so much more, to enjoy. This book is stuffed with interesting facts and tidbits that opens up the world of Zelda like never before.