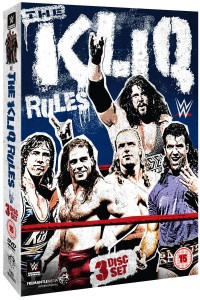 The Kliq Rules (WWE DVD)
Go figure – Triple H is the heir-in-chief of WWE and the faction he was involved in – The Kliq – become canonized in wrestling legend as the most influential group of wrestlers to ever step foot in a ring!  That said, it is hard to argue when one looks back at the grappling glory days of the “Monday Night Wars” and sees WWE leading the charge with Kliq members Shawn Michaels and Triple H against WCW’s NWO consisting of Kliq members Nash and Hall.  The wrestling world would certainly be a very different place if these four individuals hadn’t been a part of it, and more than any other influential group in wrestling — the Horsemen, the aforementioned NWO —what makes the Kliq stand out against the rest is that they were not a wrestling gimmick, thrown together by promoters, but a self-made group.  A band of brothers who found kinship with each other on the road and decided to stick together to be a sum greater than the individual parts.  Hence the inclusion of X-pac, Sean Waltman, into the group.  Unlike the four other Kliq members, X-pac never quite got to the heady heights of main eventing Wrestlemanias, but he was integral to the early days of WWE dominance and the only member of the Kliq to be a member of both D-generation X and the NWO at the height of each group’s successes.  But such success isn’t important — X-pac is a member of the Kliq because he is a member of the Kliq, and the Kliq is “4 life”.  These guys are friends first and foremost, and by maintaining that bond of friendship in the backstabbing political snake-pit of professional wrestling they managed to make an indelible mark on the wrestling world and turn both WWE and WCW into their own personal playgrounds.
The documentary portion of this DVD set is essentially five old friends sitting down in a room together and shooting the shit about old times.  It’s strangely compelling viewing, despite no real new ground being uncovered.  After all, one of the problems of being the group that wrestling historians never shut up about is that we already know their story: road buddies who formed a bond, decided there was strength in numbers, had Vince McMahon’s ear (much to the annoyance of the rest of the locker room) and then played up to the perception of the rest of the roster that they were an exclusive clique by, well, becoming an exclusive “Kliq” who, against all odds, managed to straddle both major wrestling companies in America throughout the nineties.  But it is nice to hear them telling it in this informal, chatty way (though at times the sound quality gets a little ropey!)
However, the real selling point of this set is not the well-worn story of how five hungry young wrestlers teamed together and ended up dominating the industry (all but X-pac hall-of-famers, two of them founding members of the legendary NWO, one who will go down in history forever as “Mr Wrestlemania” for his unparalleled stand-out performances, and the other now the boss of the entire wrestling industry), but the two discs of matches charting their emergence and legacy.  I’m not just talking about the expected classics — Shawn and Razor’s ladder match at Wrestlemania X, the stunning “No Holds Barred” match between HBK and Diesel at April 1996’s “In Your House” event — though they are also included.  I’m talking about the gems from old Monday Night Raws, Superstars, Action Zones, and the like, where we see how the Kliq made business for themselves by creating compelling episodic storylines and angles with each other and putting on unforgettable matches regardless of the venue at the time.
As well as rare gems like an early match between Shawn Michaels and Triple H from 1996, and Razor fighting Diesel for the Intercontinental Championship back in 1994, we get the infamous “Curtain Call” video in its entirety.  A video almost sweet now in its simplicity — good guys and bad guys hugging and posing together in the ring at the end of a show because they are real-life friends and this is their last time working together in the company.  What is commonplace now was sacrilege then, and hearing the live crowd reaction — especially of the fans taping it at the time — is delightful in its naivety and innocence.
All in all, this is not new territory, but it is well packaged and full of entertaining matches and footage.  I really wanted to hate this, but ended up finding it irresistible.  Like the Kliq itself —this set is annoyingly good and hard to find fault with no matter how much the idea of Triple H and friends doing another cash-in may gall.  Dan McKee