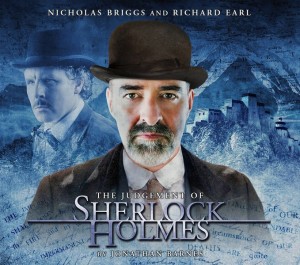 The Judgement of Sherlock Holmes – Starring Nicholas Briggs, Richard Earl, John Banks, Tim Bentinck, Gemma Whelan, Jemma Churchill, Terrence Hardiman , Nicholas Chambers,  Joannah Tincey,  Dai Tabuchi,  David Killick & Written by Jonathan Barnes – 4xCD / Download (Big Finish Productions)
The secret of literary immortality lies in being to capture the imagination of successive generations, and Sherlock Holmes has held the world in his thrall since his debut in ‘Beeton’s Christmas Annual’ nearly one hundred and thirty years ago. Since then, his prose, radio, silver screen and televisual adventures have enthralled and enraptured legions of admirers, and even though his original creator Arthur Conan-Doyle left the mortal realm long ago, thousands of new crimes and mysteries have appeared for Holmes and Watson to solve, thanks to a myriad of authors who stepped into the breach, picking up where Doyle left off.

The latest of these is ‘The Judgement of Sherlock Holmes’, is a four part drama that takes place during the years between ‘The Final Problem’ and ‘The Adventure of the Empty House’ when the world, and Watson, believed Holmes to be dead, having fallen, along with James Moriarty, to his death at Reichenbach Falls. Both Holmes and Watson, independent of each other and in far different locations, become embroiled in the machinations of a secret organisation that seeks to bring about the end of the old order and the beginning of a new world through assassination, murder and wholesale destruction. And as the devilish scheme moves closer to fruition, Holmes and Watson, separated by distance and the latter’s lasting and firm belief that the former is dead, find their every move thwarted as despite their most extensive individual efforts to stop it, it seems inevitable that everything that they know and hold dear will be consumed by fire and death. From the mountains of Tibet to the darkest corridors of power in London, ‘The Judgement of Sherlock Holmes’ is a hard boiled, period political thriller, that incorporates Buchan-esque elements within a Holmesian framework to craft an adventure that sees our much put upon, and endlessly courageous hero fighting not just against the forces of evil, but for family, honour and friends as well, in an absorbing and captivating tale that draws you into the world of Sherlock Holmes and refuses to let you go.

The attention to detail, dialogue, plot and period that Jonathan Barnes imbues his story with is mind-boggling; his accuracy in capturing and including all that Doyle fashioned is staggering, and as such the end result is simply magnificent. Nicholas Briggs and Richard Earl, are to my mind at least, the definitive Holmes and Watson (and when I occasionally return to Conan-Doyle’s stories, it’s their voices that I hear while reading the tales of the consulting detective and his dearest friend), as their performances embody all that is good, right and just about the characters while inhabiting them completely. Continuing, in fine form, the tradition that Big Finish have established with their Holmes series, ‘The Judgement of Sherlock Holmes’ ensure that the legacy of that most beloved of literary characters is most assuredly maintained and that his immortality is, for now at least, guaranteed. Bravo… Tim Mass Movement