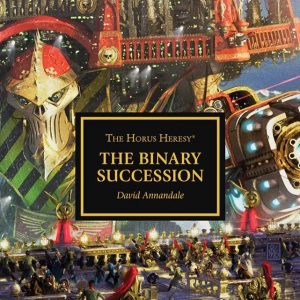 “There can only be zero or one, there cannot be both…”

War is a many faced dragon. While the mask it usually wears is a painted landscape of unmitigated violence, destruction, death and devastation, there are other facets and disguises that it adopts in order to fulfil its agenda. Sometimes it revolves around the will of individuals, of conflicting ideas and ideals and the undreamt of lengths that those caught in its grasp will go to in order to see their plans and desires come to fruition. Such is the fate of the Mechanicum, divided by the war between the Emperor and Horus, with the priests loyal to the Empire exiled to Earth and Mars held in the grip of the traitorous devotees of the Warmasters cause. Fractured by their differing allegiances, the Mechanicum is trapped in the thrall of The Binary Succession; with one would be leader residing on Earth, loyal to the Imperium, and another on Mars plotting against it. For the Mechanicum to exist, logic must be maintained, there can only be one Fabricator General and The Binary Succession must be brought to an end, one way or another.  And it is the duty of Vethorel, Mechanicum Ambassador to the Imperium to ensure that it is ended. But some tasks are easier than others to accomplish, especially when the members of the Council of Terra, with whom she has to negotiate to ensure the Mechanicum’s survival, seek to fulfil their own schemes. Forced into a desperate course of action, Vethorel has no choice but to gamble the future of the Mechanicum, her home world and outlying forge planets on a near suicidal game of cat and mouse that will either be the salvation of all she holds dear or its ruin. With the deck stacked against her and the Mechnicum, Vethorel and her allies rally their forces and begin to play the game on whose outcome everything depends.

Spinning a web of political intrigue, The Binary Succession is an all too rare beast in the Warhammer 40,000 arsenal, as it doesn’t rely on blistering action and combat to tell its tale. In fact, there is nary a shot fired, barring a brief period of intense discourse in which the loyalties of all Earth bound Mechanicum priests and adepts are finally decided. David Annandale’s story is a dialogue heavy, character driven story powered by politics, division and the machinations of all involved, and is a creative and ingenious slab of hard hitting, immediate and personal space opera that perfectly illustrates the hidden struggle faced by those loyal to the Emperor who are nether civilians nor members of the Adeptus Astartes.  Or even entirely human. Brought to life by an exemplary cast who add extra fire power to Annandale’s story, The Binary Succession is a fiercely mesmeric drama that will dwell in your subconscious long after the Council of Terra’s chatter and the howl of Martian war horns have faded into nothingness. War has many faces. This is one of them… Tim Cundle