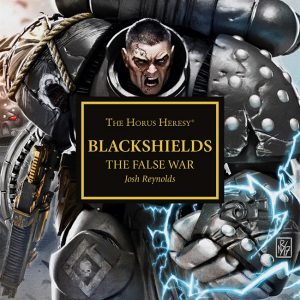 There are two ways to listen to Blackshields: The False War, by Josh Reynolds.

The first way is as a totally clued-up, tooled-up, steeped-in-lore Warhammerer, keen to hear the first audio investigation into the relatively new gang on the 40k block, exploring the actions of the outcasts, marauders and heavily armoured chancer-legions from the Age of Darkness period of the Horus Heresy in the 31st Millennium…

The second way is to listen to it in a relative absence of knowledge and see if it makes any sense without the layers upon layers of context and gameplay background with which it’s been designed.

Chances are, if you come into this one with your lore at the ready, intending to judge it against your expectations of the Blackshields, you’ll come away at least somewhat satisfied  – The False War is by no means a dull take on the Blackshields, or one that might be written by just anyone. There are explorations here of deeper elements than blood, metal and thunder, and Reynolds gives both context and a degree of personality to his characters that pulls you through and lets you feel like you’ve learned something about the mindset of at least one band of Blackshields, under former World Eater Endryd Haar. But it’s also arguable that you get more out of it by coming to it relatively fresh and free from expectation, because if you do that, what you have here is a kind of evolving three-dimensional chess game of diplomacy and looming, threatening violent devastation, while standing on the crust of an intergalactic crème brulee – several parties are represented here, several allegiances, and some of them are stacked one on top of the other, with fakery and falsehood one reveal away. Somewhere, elsewhere, there is the emperor and there are the Horus legions, and all manner of collision and corruption is going on. Reynolds focuses us in fairly tight on a potential deal, a display of war-armaments using flesh to demonstrate their effectiveness, and the way in which words said and views held unsaid can burn like fuses till they emerge and turn a moment into an opportunity to win, whatever the game and whatever the stakes. It’s pitched somewhere between Ocean’s Eleven and the Cuban Missile Crisis, in Iron man’s 31st century backyard.

That makes for some tense and sweaty listening over the course of 72 minutes, a sensation intensified by the presentation style, which mixes full cast scenes with narrative passages, allowing us to more fully appreciate the scale and the stakes of what’s going down here – a potential buying of loyalties, a double, or maybe triple cross as characters reveal more of the truth of their purposes, and a final push like the falling hammer of a gun towards a cliff-hanger that seems to either demand a sequel story or to cruelly invite listener-speculation about what happens next.

In among the sweat and death and double-dealt diplomacy, there’s also a kind of war-poetry in Reynolds’ writing, which helps to frame the story like a battle-bard’s ballad – ‘how else does one wage a shadow war,’ he asks us, ‘but with shadow weapons?’ while invoking the sense of a legion bogged down in ‘the weight of old loyalties and new sins.’ It’s impressive stuff, and it helps re-draw the parallels between ancient Games Workshop properties and premises, all battle-axes and orcs and the like, and the newer translation through a heavily-armoured science fiction language that is one of the hallmarks of Warhammer 40,000.

Perhaps most of all, if you come to it without the burden of too much depth of knowledge, there’s a sense of being applicable in the real world around us even now – forces of order and forces of chaos, talking, trading, trusting hardly ever but prepared to make unorthodox moves to come out ahead of every other player’s game, with phenomenal and ghastly stakes whoever wins or loses. The clash of diplomacy and weapon-death is entirely alive and relevant in our current world, so Blackshields: The False War feels like it hits us where we live, even though its language may be strange to our ears, and its power-blocs hugely different to those with which we currently contend.

Reynolds has created in The False War both an allegory of power and chicanery that speaks to the here and now and a kickass, gritty, sweaty tale of Blackshields for those who think they know them, to open up another front of access to their lives and their reality within the Warhammer 40,000 universe. If you’re already deeply into the 40k universe, it’s worth listening to at least once for the angles and the surprises that it holds. If you’re a 40k noob, cunningly, it’s probably worth listening to at least twice – once for its simple power in the here and now, and once more to take notes of all the things you’re going to need to look up and to look at further. Tony Fyler