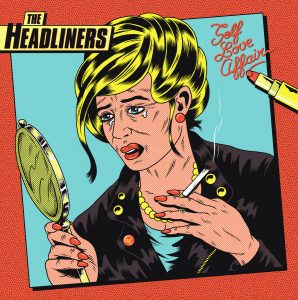 I caught this French steetpunk band a few years back in Berlin’s Wild At Heart and they put on a great show. I checked out their early releases, which were very much a tribute to the early Chiswick records style, maybe with some Slaughter &The Dogs or Menace thrown in. A few years down the line, these boys from Nantes have been developing their songwriting and come on leaps and bounds with their style. I think the hair might have grown an inch or two and the guitarists have added a couple of chords more to their repertoire as The Headliners have vastly expanded their sound.  The power-pop/ mod influences are strong in this one! Taking their cues from the likes of The Undertones or Secret Affair, they have nailed the fine art of writing the perfect three minute pop song. There are still signs of the old style with some snotty vocals and attitude remaining prevalent through the album, so it’s good to see that the band has not completely changed their style, but simply built on the promise of previous releases. Definitely an album to be proud of. Tom Chapman