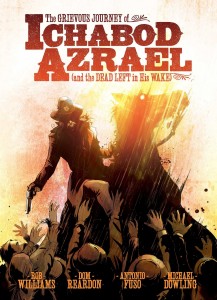 The Grievous Journey of Ichabod Azrael (and the Dead Left in His Wake) – Rob Williams, Dom Reardon, Michael Dowling and Antonio Fuso (Rebellion)

Time for another offering from Rebellion and it’s another tale originally presented in 2000A.D.  Having just waxed lyrical regarding my fondness of the early days of that hallowed publication (see my review of Dandridge – Return of the Chap), I don’t intend to repeat myself here.  Suffice to say that I have fond memories of Johnny Alpha, Bad Company and dozens of other stories from the early days of 2000 A.D. So I had high expectations from this.

Ichabod Azrael is a vicious murdering bastard of the first order.  A bushwhacker and bandit taking advantage of the American Civil War, he manages to rack up a kill count so high that even his fellow desperadoes  are unnerved by him.  Eventually his slaughter of all and sundry leads him into an ambush by bounty hunters and his death. Which is where Ichabod’s journey truly begins.

You may have guessed, Ichabod is rather good at killing and just because he’s in the afterlife, he sees no reason why this should change.  Rather than wait for a judgement with only one outcome, Ichabod decides to make use of his particular skillset and kill his way back to the land of the living and to one thing he loves, his gorgeous wife.  Mysteriously gaining two six-guns with an unending supply of bullets that can kill demons, Ichabod proceeds to do just that.  Along the way he picks up some comedy sidekicks in the form of the two spirits: Zebulon Crow, a sheriff Ichabod had murdered shortly before and General Nathaniel M. Beauregard, a crazy Southern General who blames all the world’s ills upon the ‘injuns’ that killed him.

However, the forces of Heaven and Hell aren’t about to let these unlikely allies just waltz back to the land of the living and so unleash The Hunter, a man just as vicious and cold-blooded as Ichabod himself and aided by three demonic hounds.  The conflict between Ichabod and The Hunter develops into an epic battle that stretches through time, eventually threatening the very fabric of reality.  This leads to Ichabod’s second visit to the afterlife and ultimately a confrontation with God in a town populated by the souls of all those he murdered in life.  With reality itself on the line, can a sociopathic murderer like Ichabod really find redemption and love? You’ll have to read the book.

It’s a good read if you’re looking for something a bit different from the usual super hero and science fiction fare. in fact it’s debatable as to there being any hero at all.  It’s an interesting mash up of religion and the old west, all lovingly drawn by the artists involved.  There are angels, demons and Charon ferrying souls across the Styx, with Ichabod murdering his way through all of them. It’s not up there with the best of 2000 A.D.’s output but it’s still worthy of your time and a story the creators can be proud of. Paul Ferriday