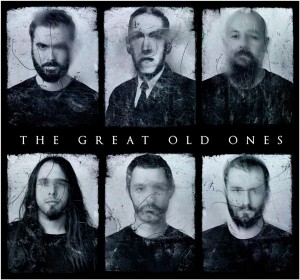 Season of Mist are proud to announce the signing of THE GREAT OLD ONES.The French Lovecraftian Black Metal cultists will release their next full-length on the label.
Regarding the signing, THE GREAT OLD ONES comment: “We are very proud to announce that we have signed a deal with Season of Mist, one of the most influential metal labels. For us this will hopefully mean a great leap forward and an opportunity to spread the word of our master H.P. Lovecraft even further. The recording of our third album has been scheduled to take place with El Mobo in Conkrete Studio in May 2016.

“We  all want and have to give thanks to Gérald and all the team at Les Acteurs de l’Ombre Productions for supporting us since the beginning, and for their kind understanding towards our choice. Last but not least, we would like thank our fans and hope they will stay with us through the new dark tales to come. Cthulhu fhtagn!”

As their name implies, THE GREAT OLD ONES are heavily inspired by the works of H. P. Lovecraft. Like the sinister novels and stories of the American gothic horror icon, the music of the French delves into the forbidden, dark, haunting, and violent spheres of art.
The band emerged from the old parts of the ancient Aquitanian harbour city of Bordeaux as famed for its secrets as for its deep red wine in the year 2009. Their first album, ‘Al Azif’ was recorded and mixed by Cyrille Gachet (YEAR OF NO LIGHT) and mastered by the renowned Alan Douches (MASTODON, TOMBS, THE DILLINGER ESCAPE PLAN). After it was let loose on an unsuspecting world in April 2012, the reactions of critics and fans were unanimously positive, which opened previously locked doors to perform at shows all over the old continent alongside acts such as AURA NOIR, FORGOTTEN TOMB, NEKROMANTHEON, BORGNE, TEMPLE OF BAAL, and ISOLE to name but a few – as well as being invited to the prestigious Hellfest Open Air in France.
THE GREAT OLD ONES took another step with their second full-length ‘Tekeli-li’, which garned even higher praise and unlocked further opportunities like a show at the acclaimed Roadburn Festival, opening for BEHEMOTH in their homeland, returning to Hellfest, and supporting SHINING in France.
Now the Bordelais are preparing to go further down the path leading to insanity by recording their highly anticipated third album and a full European tour in support of German label mates DER WEG EINER FREIHEIT this spring. Please see below for a complete list of confirmed dates. In hinting at things to come,THE GREAT OLD ONES reveal a glimpse of the future by sombrely quoting H. P. Lovecraft:

“That is not dead which can eternal lie, and with strange aeons even death may die.”