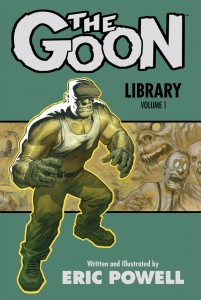 Whaddaya mean you ain’t never heard of ‘The Goon’? Ain’t none of youse guys got your ear to ground or know what’s what? Jeez, I feel sorry for you, I really do, because Eric Powell’s pulp powered anti-hero, for my dime anyways, is one of the funniest and most original characters to have sprung out of the world of comics in the last couple of decades. And the adventures and stories that he gets caught up in? They’re pretty darn good as well.  Goon, as he’s referred to by his psychotic side-kick Franky, is a mob enforcer in an alternative thirties US where monsters, mad scientists and zombies are all too real. He spends his days and nights defending what’s his boss’s from the encroaching undead criminal hordes and their voodoo-priest-meets-black-magician Cappo. Raised by his strong-woman and professional wrestler Aunt in the carnival, Goon has seen and mostly done it all, and brings his muscle and street-smarts to the battle against evil and things that go bump in the night. Imagine an LSD fuelled version of Eisner’s ‘The Spirit’ that had been fed on a steady diet of Golden Age Science Fiction, The Freak Brothers, Ray Harryhausen films and Universal monster movies and whose idea of morality is, at best, compromised and at worst almost non-existent, and you’ll find yourself in Goon’s neighbourhood.

Library Volume 1 is the perfect introduction to The Goon, as it collects the characters debut and his initial stories in one handy, if slightly massive, book. His origin, history and those of his associates are all chronicled in its pages, which thanks to Powell’s inventive, innovative and entertaining story-telling and eye-popping Mignola meets Crumb artwork, will keep you glued to every word and panel from the first page until the last. If you can put this book down once you’ve started reading it, well, I guess you ain’t firing on all cylinders in the brain department and you just don’t like having fun. But you do like having fun, so you’ll be reading it from cover to cover and when you finish doing that, you’ll start all over again won’t you? Yeah, that’s what I thought. So what are youse mugs waiting for? Go get ‘The Goon’… Tim Mass Movement