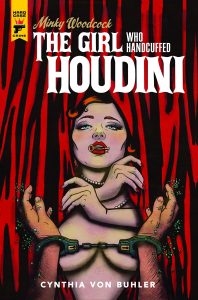 Based on real events surrounding the death of one Harry Houdini in 1926, Minky Woodcock: The Girl Who Handcuffed Houdini sees Minky, a rabbit-loving and desperately aspiring private investigator, attempting to stick her nose firmly where it isn’t wanted after being paid a visit by Arthur Conan Doyle who needs her to expose Harry as a “competitive and vindictive spiritual medium”.

The story follows Minky as she befriends the wife of Houdini, becomes his new assistant, and ends up deeply entrenched in an ultimately fatal war between him and the spiritualists he publically declares as frauds. With a rich and weird cast of characters based on real people, including Margery, the naked psychic who spews “ectoplasm” from her bajingo, the author of Sherlock Holmes and his “psychic” wife, and even a small cameo from Agatha Christie, Minky tries to put the pieces of Harry Houdini’s death together, and at the same time save herself from the same mysterious fate.

Whilst this book is enjoyable enough due to its well-paced storytelling and rich selection of players, Cynthia Von Buhler’s art lends a psychedelic aura to the tale which gives it a cool, meaty quality with its hypnotic use of colour which grants it an energy that pulls you deeper into the story with each dynamic panel.

Including alternative covers by the likes of the ever-ethereal David W. Mack, Robert McGinnis, Fay Dalton, and the particularly, and suitably, hard boiled offering from Dean Haspiel, the book also comes complete with the history of the detective novel, and true crime facts for those hungry for some real life Houdini mystery solving. There’s plenty here to get your teeth into, even beyond the conclusion of Minky’s antics.

Something close to a mildly adult Enid Blyton mystery, complimented by stained glass art that bursts from the page, The Girl Who Handcuffed Houdini will make you hungry for another pulp detective whodunnit before you’ve even turned the last page. Sophie Francois