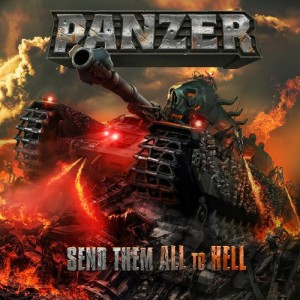 The German PANZER – Send Them All To Hell CD (Nuclear Blast)
Looking at the line up of this German trio, it’s thankfully no surprise that ‘Send Them All To Hell’ is a complete cacophony of Destruction and Accept stylee euphemisms – very decent indeed. Schmier’s wicked vocal screams crucify what is only best described as old school fast paced heavy metal, solid, hard and weighty. Herman Frank’s guitar riffs away like a motherfucker spewing out lick after lick of tasty metal morsels. There is definitely no denying where these guys hearts and beliefs lay as Stefan Schwarzmann adds the final piece of the jigsaw with his sonic beats and weighty drum rhythms. Even the album title has 100% metal written all over it. Amongst the ten tracks present, there also lies some pretty hefty chorus bellowings you may find incredibly hard not to anthemicly bang your head and punch your first in the air to. Panzer don’t bring anything new to the table, they will not blow you away with new sounding ideas, but what they do deliver is teutonic speed induced metal. Mark Freebase