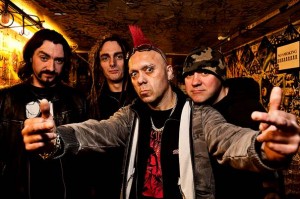 British punk legends THE EXPLOITED have made a return after singer Wattie Buchan had a heart attack during a show in Lisbon on February 13th of this year. But now, only 10 months later, they’re back – stronger than ever.

The band comments:
“It was very important for us that Wattie cures completely. Now he’s recovered and we can go on working with new power.
We’re totally hooked to enter the studio to record new songs and of course we’re thrilled to play the upcoming live shows.
Watch out / get ready THE EXPLOITED is back – better than ever!”

The Exploited are working on a new studio album, which will be released in summer 2015 via Nuclear Blast.
They will play punk fest Scotland Calling in Glasgow on the 25th April with The Damned and UK Subs amongst others, tickets available here.

Order one of the re-releases of the British punk legends albums for a special price in the Nuclear Blast X-Mas-Special behind advent calendar door number 12.
Take a look.

Live shows confirmed for 2015. You should mark in your calendars:
FEBRUARY
27.02. NETHERLANDS-DRACHTEN-IDUNA
28.02. NETHERLANDA-ROTTERDAM-SCAMBASH FESTIVAL