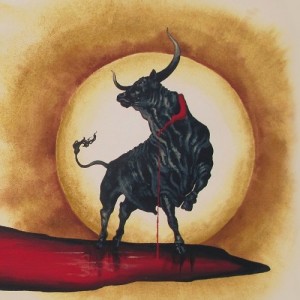 The Exploding Eyes Orchestra – I LP/ CD (Svart)
This band is actually a project by five of the seven members of the band Jess and The Ancient Ones who I have never heard. The Exploding Eyes Orchestra are a Scandinavian band whose sound is based loosely on metal and prog, with occult leanings. Whilst this might suggest a likeness to Ghost, this is a fleeting similarity, as these guys and girl have really created something very unique. It is difficult to pick a starting point – you have so many great ingredients that come together on here – soulful female vocals that carry the tune, hard rocking passages that bring to mind the likes of Deep Purple or Uriah Heep, atmospheric piano-driven passages, spaced out blues rock or out and out prog. The mood conjured up is one of sweet oblivion, a tranquillity but you know is masking something sinister, unseen. Imagine parts of the river scenes in Apocalypse Now, where you have the GIs leading a surreal uneasy life on the boat, surrounded by rich tropical paradise but knowing that there is an hidden menace lying in the rotting vegetation. Powerful, sweet tunes have that sinister undercurrent, with morbid lyrics (“we are better off dead”) underpinned by moments of musical dischord. Although there are varied influences on here and the delivery differs from song to song, from the straight up rocking of opener “The Smoke” to the atmospheric blues-rock of “Black Hound” which mixes sung passages with spoken work excepts from HP Lovecraft’s “The Hound”, there is a coherency to the whole collection of songs. As I mentioned at the start of the review, this band and their history is all completely new to me, but they have produced a compelling album that I have been listening to over and over again. Tom Chapman