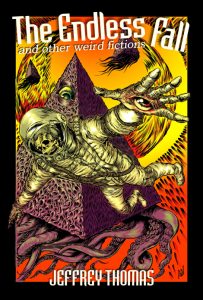 I’m always open to read authors I’ve heard about when going through lists of books that are coming out. It’s how I heard about writers such as John Langan, William Meikle, and Brett J. Talley to name a few. Now I’m not usually one for books of short stories but there is something to be said sometimes for being able to pick up a book, finish one story and put it down until you get enough time to read another short.

Since this is a collection of short stories, let’s take them one at a time:

Jar of Mist – Oskar, a grieving father, tries to figure out the last bit of his daughter’s life before she is buried. What he discovers is much more than he could have ever imagined. This, the first story in this collection, it sets the tone beautifully for what is to come  whilst still holding on to true emotion with a bittersweet end.

The Dogs – A man is enthralled with a window he created that shows the end of the world and the denizens that inhabit it. A slow moving short where the main character realizes that the world is close to breaking and wishes for what he sees to come to pass.

Ghosts in Amber – The fear of spiders is just the backdrop of a man whose marriage is on the rocks until he finds a wedding album in an abandoned factory.  What follows though helps his wife more than him in another slow burner with a very strong ending.

The Prosthesis – Gale Therapeutic Appliances is where Thomas works, but little do his employers know he has been stealing the body parts the factory creates to make something. This story is a great example of how a simple idea can be made into something strange and horrific with just the right twist.

The Dark Cell – Rose, a prisoner of the Yuma Territorial Prison is giving a new cell mate, 16 year old Maria who has killed her brother. Rose wants nothing to do with her new cellmate but Maria has other ideas. This story is pure horror and the reader is left to fill in some of the blanks of what happens in a cage both women are put into after they get into a fight.

Snake Wine – Gorch, a bar owner in Vietnam, decides to partake of a rice wine provided by a hopeful sex partner, yet the after effects of the drink are more than he expected. A quick story that is more about bad choices than anything else. Though we are left wondering what exactly was in that wine.

The Spectators – All over the world statuesque beings appear. Most people view them as something of horror but after a time one man comes to a different conclusion. A quick tale about emotion and the power of letting go.

Bad Reception – Stan, who suffered a head injury during the Korean War, finds out during a thunderstorm that his TV both receives, and transmits pictures. More attention grabbing horror that definitely delivered, although I was hoping to find out what caused the destruction seen in the TV.

Sunset in Megalopolis – the ultimate superhero, Ultimatum has been in a stasis field for a millennium and is released when the new inhabitants of the world accidentally set him free. To his chagrin everything he does now is wrong. This one was a nice surprise as it shows no one is perfect and it drives Ultimatum to just consider something he never thought of before.

Portents of Past Futures – Los Angeles police officer Dill is drawn to figure out what really happened when a body is found in front of a mural with the words ‘ART is dead’ painted on it. A nice mystery based story that leaves you wondering what was really going on while still ending nicely.

Those Above – Hind, a factory worker, gets promoted after asking a question about the beings that now cover the sky all over the world. But what Hind doesn’t know is that by doing so he now learns more than he ever wanted to know. Nihilistic and unforgiving is the best way to put this tale. Perfect.

The Individual in Question – After an event, a person is questioned about what happened in his hotel room. The shortest story in this collection clocking in at only two pages. While interesting there are just too many questions left unanswered.

The Red Machine – Leslie, an inspiring artist working at a job she hates, inherits her grandmother’s home where she builds a machine that does something very special. A great story with plenty of emotion and familial conflict. The only thing that could have helped was a little less time spent at Leslie’s workplace but it doesn’t take away from the story.

The Endless Fall – An un-named man wakes up with no memory inside a capsule and has to find a way to survive in his new environment. Not a bad way to end the collection and one that contains horror as well as wonder.

All in all a solid collection of stories. While each wasn’t spectacular,, some were fantastic, in particular The Spectators and The Red Machine. Yet, good as they are, Those Above is the standout in this book. For anyone that likes dark fiction or would like to be introduced to ‘weird fiction’ this is a satisfying read with some of the stories having a surprisingly emotional chord.  Jason Bonton