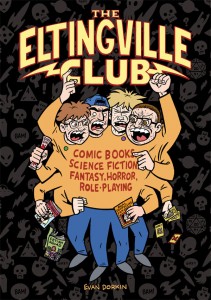 Oh my! Now this is a gem that any comic reader or fan of anything should pick up. Evan Dorkin, who has won six Eisner Awards including one just last year, has his pulse on the world of fandom while remaining one himself. This collection of shorts, spanning 20 plus years, looks at all the funny as well as sad stuff happens in the world of fandom, although it’s not quite as messed up as it is reality . The fights that happen over the perceived intent of the words of fictional characters, to the fights over the one remaining collectable are all things that actually happen and have happened. I know this, because they’ve happened to me. You want an example? Okay, here’s an example. I ended up arguing with a friend about what Yoda said to Obi-Wan about Anakin at the end of the first less than impressive prequel. So, what I’m trying to say is, this stuff, it really happens.

A lot of this book hits home to me, being a fan, a reviewer, and a former employee at a comic book store for over three years. Everything in the book, while exaggerated, hits the culturalside and the ugly side of fandom while remaining funny. And I can say that because I’ve seen, and experienced, both sides of the phenomena. This is a MUST read that will have you laughing while also re-examining how much of a fan you really are and if you’ve ever gone too far. Which we all have, at one time or another… Jason Bonton