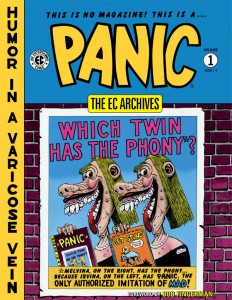 Once again Dark Horse has another archival volume out and this time it’s from the the sister publication of MAD Magazine. In this first volume, of which I’m expecting there’ll be two due to the fact there were only twelve issues published, issues one through six are included.

It’s a real treat due to the inclusion of the controversial satire of The Night Before Christmas in which the original story is told but it’s given a “fresh” spin, which was reason the series was banned in Massachusetts. This to me, is more than enough reason to buy this volume.

But there’s more on offer here than just that story. A lot more. The parodies, the takes on fairy tales, The Phantom, Dick Tracy, as well as baseball jargon. There’s an insane amount of content to admire and I’m after reading it, I’m left wondering how the magazine got away with what it did during the time it was published. Then again, this was EC who also published Tales From The Crypt among other magazines, a company that delighted in pushing the boundaries of what was deemed safe and wholesome during the time of Joseph McCarthy and the book Seduction of the Innocent.

With art by legendary figures like Wally Wood and Jack Davis, there’s plenty to love about this book, and it should be picked up and enjoyed by everyone, even with its relatively heavy cover price. Think of it as a leap into the past for a lesson in comic history that doesn’t feel like a lecture, rather a masterclass humor from a bygone age. You don’t want this book, you NEED it… Jason Bonton