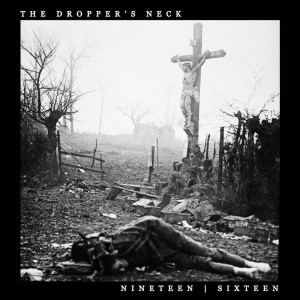 The Dropper’s Neck – Nineteen Sixteen (self release)
Not as sludgy as the press release suggests but a clean and slick 7 track EP, hailing from Essex the band were formed in 2011 and after touring the country they released debut album “Second Coming” to critical acclaim. The more I listen to this the more I like it, very good guitar parts and quite intricate work with the twiddly bits, especially in the excellent “Line Me Up For The Firing Squad” which is my personal favourite. Screaming vocals mixed with melodic singing makes this stand out from the usual screamcore bands. All the songs are just the right length at around the 3 minute mark which is about perfect. Some of the vocals stray in to The Cramps territory of Psychobilly with a hint of (dare I say it?) Jello Biafra style, more so on “Monster”. I can imagine the live performances being absolute chaos, stage diving everywhere. Make your own mind up, but believe me when I say this, I am right and The Dropper’s Neck are great!! Paul Hoddy