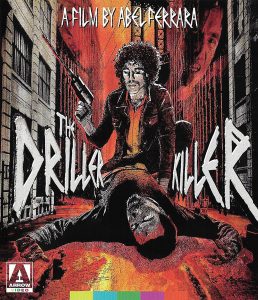 A screen stating ‘This Film Should Be Played Loud’ starts the film in large, bold, text and it’s understandable why.

When a no-wave punk band move into an artist’s apartment building in Union Square, NYC, the constant noise and bickering of the people around him drive him to insanity, causing him to pick up a power drill and hunt the streets for the homeless population to brutally murder.

As with a lot of Arrow’s releases, the artwork for these movies has always played a crucial role in their image to the public, and without doubt The Driller Killer is the most important one of all. In an era where small video labels were marketing their video releases in the most extreme ways possible, in order to profit from the loopholes that allowed them to sell movies not seen in the cinema, the sight of a man’s head being drilled open with promises of intense gore caught the eyes of the censors and other busybodies.

And thus the video nasty was born, with The Driller Killer being the poster child and being singled out as being almost entirely responsible. The irony being, like a lot of the movies that made the list, the marketing was certainly the only reason as the content of the movie is surprisingly tame.

More arthouse than horror, the majority of the film feels more fly on the wall of how the late 70s New York punk and art scene really looked. It’s no doubt a fascinating times for many people for a multitude of reasons, so to get such a raw look back at it might overshadow any feelings it might have generated on it’s release. Union Square is now a hub of the city, with multiple subway lines converging and tons of foot traffic going through it every day. To say it’s ‘safe’ is an understatement, whereas the area 40 years ago looked and felt a lot different. The Manhattan as portrayed in films like this has almost entirely disappeared, thus the cult status of these titles.

With only a few brief segments of violence, mainly in the middle of the film where the majority of the murders takes place, those expecting a typical gory slasher will undoubtedly be disappointed that the hype was based on marketing and nothing else. From that point of view, The Driller Killer is essentially a throwaway title, but the marketing simply betrays what the movie was even about. With a slow pace, low budget, dubious acting and many other elements facing it, it’s clear that it would be difficult to sell without a gimmick. It’s a trick still used by many studios today, where many dramas are sold as comedies, and foreign films have a suspicious lack of dialog in their trailers. The Driller Killer probably offers more to audiences now than it did on original release, as it offers us a look at the beginning of Abel Ferrera’s serious filmmaking prior to making titles such as Bad Lieutenant and King of New York.

With 2 versions of the film, in both 1.37:1 and 1.85:1 aspect ratios, Arrow have ensured that everyone is able to watch The Driller Killer in whichever presentation they want. With only a $20,000 budget and shot on 16mm, there’s no doubt it’s a rough looking film, but the print is in good condition for the most part and fans will certainly be impressed with the audio and video treatment.

Sporting a new commentary, a feature length documentary of the locations in NYC that inspired the director, and the usual trailers and interviews, there’s certainly enough on the disc to interest those with an interest in the movie, something which Arrow have certainly made a good name for themselves in providing on these kinds of releases.

The Driller Killer might not be the film you expect if you’re a first time viewer, but it’s certainly a lot more interesting than the generic slashers of the time. With its history in the 1984 video licensing act in the United Kingdom, it’s absolutely considered an important film there than maybe it would be in the US.  James Connors