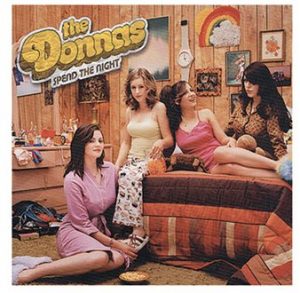 You know, I’ve been doing this so long and I’m so old that I actually reviewed this record when it was first released.  And it wasn’t even the first Donnas record that I reviewed. It was the fourth. Yeah, that’s how old I am. Spend the Night was The Donnas major label debut, having jumped ship from their previous label Lookout to what was, almost certainly at the time,  a much better deal with Atlantic. And being old, and forgetful, I’m almost certainly going to say the same about this record now as I did back then; because I loved it when it was first released and, for my many and multiple sins, I still love it. Time hasn’t diminished its instantly catchy hooks and choruses, the rock’n’roll fury of its AC/DC meets The Ramones riff fuelled anthems or the way that every damn time I hear it, I want to crack open a beer, throw caution to the wind and jump behind the wheel of a convertible ’71 GTO, mash the accelerator through the floor and just drive off into the sunset while Spend the Night blasts out of the stereo on a continuous loop.  This is everything that rock’n’roll should be, it’s loud as hell, more powerful than a V8 running twin turbo’s, it’s got more attitude and swagger than Mick Jagger and Sid Vicious combined and almost certainly comes with the Suzi Quatro certified seal of approval. Crank it up and let’s go… Tim Cundle