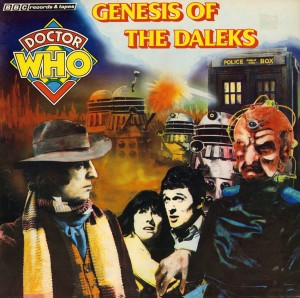 Demon Records to release a very special vinyl edition of Doctor Who: Genesis of the Daleks, for Record Store Day, Saturday April 16th.

Doctor Who: Genesis of the Daleks A special reissue of an audio Doctor Who adventure, which was originally released in 1978 on BBC Records. This collector’s edition is released on 180g heavy weight ‘TARDIS blue’ coloured vinyl and is a must-have for all Whovians. The recording was one of the first Doctor Who audio adventures, a condensed soundtrack version of a TV episode with Tom Baker providing bridging narration. The story unfolds as Doctor Who travels to the desolate planet Skaro to avert the creation of the Daleks.

This highly collectable reissue of one the most dramatic episodes in the show’s history has been recreated with the original BBC Records artwork and accompanying sleeve notes.