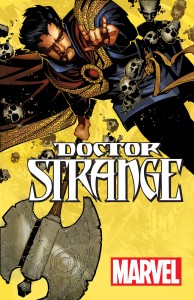 Prepare for a side of the Marvel Universe you’ve never seen before as the magical, mystical and all things weird lie at every turn. And if it’s bizarre enough, and you don’t know where to turn – call the Doctor. From inside his Sanctum Sanctorum – the strangest place in this or any universe, the Master of the Mystic Arts protects this realm from the supernatural.

“Get ready for a brand new Doctor Strange for a brand new Marvel Universe,” says Marvel Editor-in-Chief Axel Alonso. “Jason Aaron and Chris Bachalo have rebuilt Marvel’s ’Sorcerer Supreme’ from the ground up with an excitingly original take that redefines the character going forward.”

A dark new power is rising. One that will have repercussions for all magic users. The threat is growing, and Strange knows he won’t be powerful enough to stop it. If he is to have any kind of hope, it will take a different kind of Sorcerer Supreme. Because all magic comes with a price, and it’s high time Stephen Strange balanced the scales.

“None of Marvel’s other heavy hitters walk the same beat as Dr. Strange,” says Jason Aaron in an upcoming interview with Marvel.com. “None of them have to face the same sorts of repercussions whenever they use their powers. Being the Sorcerer Supreme is a unique responsibility. And it’s one that Stephen Strange embraces. Even though there’s no doubt that his job is one day going to leave him dead, damned or insane. So I want to celebrate all the weirdness that is Dr. Strange, while having him face a challenge unlike anything he’s ever faced before. One that rewrites the rulebook for what it means to be the Sorcerer Supreme.”

The epic adventure begins this Fall as the Marvel’s mightiest magician takes a battle axe straight to evil in DOCTOR STRANGE #1!

For more on Doctor Strange #1, check out Marvel.com tomorrow for the full interview with writer Jason Aaron!