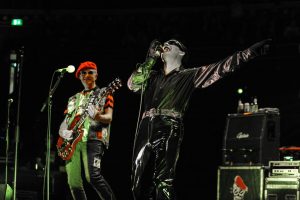 I don’t know what I was expecting when I sheepishly walked into the Tramshed’s crowded but intimate venue, elbowing my way to the front of the stage with shaking hands clasping my Cardiff-priced drink. I was prepared for a good old sing-song of Eloise, a few people my parents’ age nodding balding heads along to the drum beat, zimmer frames. What I wasn’t prepared for was the amount of energy exuding from The Damned that had this kind of togetherness that you can only find in a band that has been together for as long as they have. Sheepishness left my body. I wanted to break things, I wanted to take my shirt off and throw it in Dave Vanian’s face, I didn’t care when my 4’11” stature was thrown about like a ragdoll by people much bigger and scarier than me.

The Damned are as captivating as they were when they started in the late 70s, with Captain Sensible’s cheerful back and forth with the crowd as he stood proudly in his red beret, Stu West’s cool and composed face as though he hadn’t noticed the people screaming and beaming up at him, Dave Vanian’s witchy hand movements and subtle looks over the top of his sunglasses and Monty Oxymoron playing the keyboard with virtuosic flair. They performed with a sense of solidarity which I suppose they’ve honed over years of playing together, it made everything feel seamless. It feels stupid to say that they’re immensely talented because of course they are, a band does not maintain a consistent following for so many years or have nine UK Top Forty chart singles under their belt on accident so that’s kind of obvious. What I would like to comment on though is the band’s ability to keep their show consistently upbeat, creating this sense of nostalgia of old punk concerts that I never got to experience.

No one was stood still, no one could stand still, the music was an infection that started from their opener of Neat Neat Neat and didn’t die down until twenty minutes into my car journey home, when my legs ached satisfyingly and I’d calmed down enough to reason that perhaps it wasn’t the best idea to storm the streets of Cardiff still bobbing my head to the echoes of their setlist. I am inclined to argue the reason for this was partly due to the provocative and witty banter the band had with the audience, a favourite moment of the crowd seemed to be ‘Sing Along with Sensible’ when Dave Vanian thrust his microphone into the crowd so that they could bellow into it, often tunelessly but very enthusiastically. Their rapport with the audience wasn’t limited to this little interaction though, the whole show was infused with conversation between screaming fans and the band behind their joy. My personal favourite being a drunk man’s response of “Fuck off you wanker” when Captain Sensible asked the crowd what they thought the next song would be, which was followed by one of the band members jovially yelling back “Sorry, can’t speak Welsh” which roused an appreciative cloud of laughter from us all.

In an ITV show called What’s Wrong with the Seventies?, clips of which you can watch online now, the then drummer of The Damned, Rat Scabies says “I didn’t need to practise in my bedroom for fifteen years to play in a pub full of people” and I think that summarises the best part of the show, which I would argue was the accessibility. There was an element of admiration for these guys playing really loud music on stage, but overall, we were able to yell at them and call them wankers and that kind of added to the fun of the concert. They made jokes about being old, they poked fun at our accents, they didn’t have the bravado of being overly impressive which, to be fair, they may have earned over their years of being in the music industry. It felt like being in a bar with friends, listening to music you like and yelling crudely. In summary, The Damned know how to pull off a really great, really inclusive, really exciting show.  Emily Eve Harris