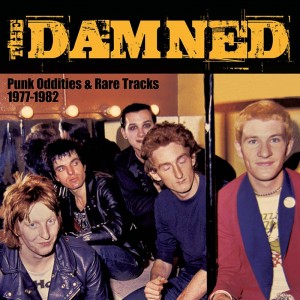 The Damned – Punk Oddities and Rare Tracks (Westworld)
To anybody unaware of the bands turbulent history, The Damned were credited with being the first British punk band to have released a punk single, ‘New Rose’, the first to have released an album ‘Damned, Damned, Damned’ and the first British punk band to have visited the states. So why didn’t they get the credit they deserved? Instead all heads were firmly pointed towards the direction of The Clash and more notably the Sex Pistols. Was it the infamous Damned curse? Or maybe it was because they had a lead singer who had a penchant for dressing like a vampire and a crazy bass player who had a fondness for performing naked and urinating over disgruntled audience members. But for me personally I have always shared the opinion of the legendary Lemmy Kilmister that the Damned were the best punk band out there. So as the band approach their 40th anniversary, with a documentary film ‘Don’t You Wish We Were Dead’ playing in UK cinemas and a recently announced 40th anniversary show in the Royal Albert Hall in 2016 (nearly sold out) what better way to celebrate than releasing two albums from the archives. Although whether these releases are approved by the band members themselves I’m unsure of; having witnessed the bewildered looks upon certain band members faces when they have been handed various compilation albums to sign over the years. The first release ‘Punk Oddities and Rare Tracks’ is a curious affair, you can’t help but feel that it’s been thrown together and where as any self-respecting die hard Damned fan would be excited to get their hands upon it to complete their collection. I wouldn’t necessarily recommend it as such to a casual listener for their first taste of these punk legends, instead I would steer their ears towards their rather fine studio albums instead. That’s not to say there aren’t some mighty fine gems for the rabid Damned fan, such as the demo versions of ‘Love Song’ and a rather shambolic ‘I Just can’t be Happy Today’, with added tomfoolery and chaos. The last recorded works of Captain Sensible before he went chasing the pop dream are featured ‘Thanks for the Night’ and the b side ‘Nasty’ that the band recorded for the BBCs ‘Young Ones’ that had previously only been available as a single, which happens to be a rather poignant moment for myself as it was the moment I fell in love with the band. There is a rather curious addition to the album a live version of Captain Sensible’s number one hit ‘Happy Talk’ included, which at the time angered many of the Damneda’ fan base, although given that it spent 2 weeks at the top of the charts and the delighted smiles on many an old punks face when Captain performs an impromptu version to this day you can’t help but thinking it’s a guilty pleasure to many, myself included. One song the current line up refuse to play live is the Rat Scabies penned number ‘Stab your Back’, so it’s nice to reminisce in the live track from 1977. Sensible has regularly joked how the Damned are better than the Pistols but that’s never stopped the band covering the Pistols material, in the past covering ‘Pretty Vacant’ but it’s ‘No Fun’ that gets an airing from 1979 that we all please the Damned loyal following. When the clown prince of punk Captain Sensible quit the Damned to follow pop stardom many thought the bands days were numbered but a quick shift in band personnel, keyboardist and rhythm guitarist Roman Jugg taking over Captain’s role as lead guitarist saw the band experience their greatest commercial success in the bands history as they continued in the Gothic reign that they explored on the ‘Black Album’.

‘Fiendish Shadows’ is a live recording from 1985 and what a great live recording it is paying particular attention to the ‘Black Album’, ‘Strawberries’, and ‘Phantasmagoria’. It’s great to hear such forgotten gems from that era such as ‘There’ll Come a Day’, ‘Street of Dreams’ and ‘Is it a Dream’. Throw in a fantastic cover of the Electric Prunes number ‘I Had Too Much to Dream Last Night’ that the Damned once re order under their 1960s pseudonym Naz Nomad and the Nightmares along with a cover of Iggy Pops ‘Lust For Life’ and you know you missed a great gig, although why the record company feature a ticket stub from an American concert when the recordings are from London is beyond me. Damned fans that prefer the earlier incarnations of the band won’t be disappointed as they finish the set with a blistering ‘Smash it Up’, ‘Love Song’ ‘New Rose’ and a rather wonderful ‘Disco Man’ that begins in a lounge fashion with Vanian introducing the number “as delivered in the (late) Val Doonican way” before storming into the chaotic number we know and love. Two rather splendid releases to please any Damned fans out there, although like many a Loyal Damned fan I would still rather invest my pennies in some new material. Dai Whistance