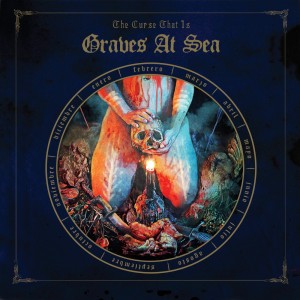 In their fifteen year career, Graves At Sea have released some truly monstrous material on the doom world, including splits with the likes of Sourvein and Asunder. But 2016 sees them release their strongest, most brutal work to date. Officially their first album, The Curse That Is, is a feedback laden wall of gargantuan riffs that will hurt even the most seasoned doomer. Greg Anderson of Southern Lord/Sunn fame, gave them their first break, releasing their 7″ Cirrohosis/Atavist Arise in 2004. Several demos and splits later, the band has gone through something of a rebirth. After losing 2 members in 2008, Graves At Sea decided to call it quits. It wasn’t until 2012 that the band decided to give it another go. They recruited Bryan Sours on drums and the brilliantly named Sketchy Jeff on bass and made their first venture into Europe. Several notable festival appearances later, including Roadburn and Maryland Deathfest, the band now find themselves at home with Relapse Records.

Make no mistake, if you haven’t got it by now, this is a heavy record. Opening track ”The Curse That Is” comes across like High on Fire at their thundering best, while stand out tracks “Dead Eyes” and “Tempest” bring to mind the mighty Yob. Indeed the whole album has been mastered by Brad Boatright (Sleep, YOB).Vocalist Nathan Misterek’s delivery constantly switches from guttural roar to guttural shriek in a similar way Kylesa do with 2 vocalists. His lyrics, focused on misery, demise and utter despair stand perfectly next to the music. We are allowed a brief respite from the savage riffery, with the acoustic/strings of “Luna Lupus Venator”, an unsettling little melody which serves as the starter to the near 15 minute finale of “Minimum Slave” another huge groove laden riff.

If you like your doom in the style of the aforementioned YOB, Eyehategod or Sleep then you should pick up this album immediately. A mid-season contender for doom album of the year. ..… Chris Andrews