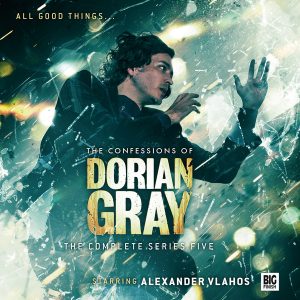 All good things must come to an end; even – it would seem – the adventures of literature’s most famous immortal anti-hero.  After five series and numerous adventures in which his audience have become more than a little attached to him, it’s time for Dorian Gray to make his final bow, as the curtain falls on his exploits and he heads for the exit. In all honesty, I didn’t know what to expect. I didn’t know if Dorian would get his happily ever after, who or what he would have to vanquish in order to taste the sweet, well-earned and long deserved scent of ‘freedom’ from the burdens and troubles that have been bound to him since the day he made his deal, or how his story would eventually end; but with hindsight and being more than familiar with Wilde’s source novel, I should have guessed. After all, how else could the tale of a man born from selfishness, vanity and narcissism end but in tragedy and despair?

Series Five travels right back to beginning of The Confessions of Dorian Gray with opening story One Must Not look At Mirrors in which Wilde, on his deathbed, remembers the time in which he gradually, but inescapably, fell in love with Dorian. Against the backdrop of a London beset by Jack the Ripper, Oscar desperately tries to make sense of his feelings, the man he is and the world around him as both it and he, descend into madness under the weight of the burdens that they’re forced to carry. Memory and reminiscence are the threads that bind this final collection of stories together, particularly those of the people whose lives Dorian touched; and in Angel of War a former lover recalls the time they spent in the trenches together during the First World War. A tale of honour, passion, friendship and loyalty, it explores the brutality of conflict and the myths and legends, true or not, that soldiers tell themselves (and which, in turn, gradually become folklore) in order to try and get though, and make sense of, the horrors that they’re forced to witness daily in the theatre of war.  Having visited the worst, and also oddly some of the best, days of Dorian’s long life, we’re thrown headlong into more familiar territory, as he and Dorothy Parker investigate mysterious deaths and a strange cult in the upper echolons of late forties Hollywood in the Lovecraft flavoured The Valley of Nightmares. Then, before you know it, and when you least expect it, everything comes crashing to a halt in the heart breaking, emotional rollercoaster of Ever After that teases the possibility that our hero’s existence may all have been a delusion, before pulling the rug (and the plug) out from under everyone’s feet in its Ken Kesey inspired, tear jerking, closing moments.  And then, just like that, it’s done.

Accompanying Dorian on his travels from the very first episode through to the very last scene has been a rewarding, entertaining and enjoyable journey full of surprises and twists, one that’s taken a number of different paths, but nonetheless one that’s always been consistently amusing and gratifying. Now though, with these four, wonderfully written and performed stories it’s all over, and I don’t mind admitting that I’m going to miss the character that Alexander Vlahos, and a legion of authors, brought to glorious and hedonistic technicolour life. I shall miss Dorian dreadfully, and never in my wildest imagination did I think his odyssey would end the way it does. But then we never want to see our heroes disappear over the horizon, do we? Goodnight sweet Prince…  Tim Cundle