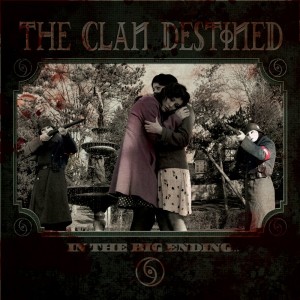 The Clan Destined – In The Big Ending (Hammerheart)
He’s a bard among metal heads, and a poet among long­-haired shouters; Martin Walkyier. Having climbed two summits of metallic success with Sabbat and Skyclad, he embarked on a new quest with The Clan Destined. Originally formed in 2004, for one reason or another the band did not make too many waves. However after the release of ‘In The Big Ending’ demo, the band fell apart swiftly. In 2009 the Clan Destined, that is with only Walkyier as original member, came back to life, yet it is still a mystery as to what the future holds for the band. Regardless of what lies ahead, Hammerheart records have ensured the great songs of ‘In The Big Ending’ are put into the spotlights once again. These six songs are somewhat in ­line with Skyclad, albeit a bit more traditional metal and less folk influenced. I love it to bits though as Walkyier bends his vocal chords once again around meticulously picked words and amazingly deep thoughts like no other. Ten years after its initial inception ‘In The Big Ending’ holds its ground remarkably well. Martijn Welzen