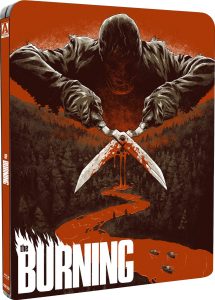 Probably the best of the Friday The 13th clones (Tom Savini, who did the special effects, actually passed on Friday the 13th Part II to work on it) The Burning has gained considerable notoriety over the years because it originally made the BBFC’s infamous ‘video nasty’ list upon its release in 1981 and was banned until it had 30 seconds of Savini’s gory effects removed.

Here Arrow present it in all its restored, un-cut glory, and it’s a much better film than you might think/remember. Of course the plot is generic, to say the least (youth camp caretaker falls foul of a spiteful prank that goes horribly wrong, perpetrated by various cocky sex-starved teens, which leaves him disfigured and deranged and – five years later – seeking sadistic vengeance against various cocky sex-starved teens), but the acting isn’t half bad (and includes Seinfeld’s Jason Alexander having a lot of fun with his lines) and Tom Savini’s effects are wince-inducingly imaginative (even if the blood is too red!)

The film takes its time building to a manic climax, and – believe it or not – you actually care about a few of the characters by the time they get impaled on Cropsy (yeah, I know, shit name for a killer)’s garden shears. The killing spree on the raft is a definite highlight, with fingers and arms lopped off with gleeful abandon, although Savini has fun with scissors and an axe as well as Cropsy’s patented hedge cutters.

Despite the violence and some occasionally gratuitous nudity, The Burning doesn’t come across as half as exploitative and misogynistic as its peers on the ‘nasty’ list due to its sense of fun, and a distinctly frat boy feel to the humorous first half. The pacing, editing and cinematography are also all accomplished enough to elevate it above most of its cheaper and ‘nastier’ (for all the wrong reasons) peers as well. And Arrow have loaded this enjoyable and undeniably definitive release with plenty of extras, including new interviews with Savini and the key actors, and even an interview with the soundtrack composer – none other than Rick Wakeman from Yes! Ian Glasper