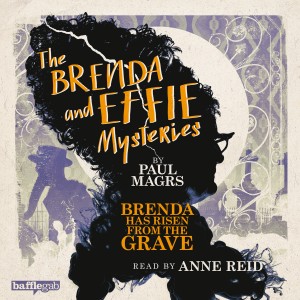 The Brenda & Effie Mysteries: Brenda Has Risen from the Grave – Written by Paul Magrs & Performed by Anne Reid, Dan Starkey & Stephen Critchlow – Download (Bafflegab)
And so we return to the streets of Whitby for the last time (in the current series at least) as Brenda and Effie face their deadliest foe yet; one who might not just end their lives, but their friendship as well. Having survived spectral cats, demonic parents, possessed puppets and murderous mummies, Brenda and Effie’s friendship is tested to the limits of its endurance and beyond by the one thing their paranormal partnership could never have prepared them for. A man. But Keith (for that is his name) isn’t any “ordinary” man, Keith is an elephant man and claims to be a direct descendant of Joseph Merrick himself. And almost as soon as he sets foot on the cobbled streets of Whitby, Effie falls head over heels in love with his over-sized ears, tusks and trunk. Brenda on the other hand, having known Mr Merrick, soon begins to feel that something isn’t quite right and as bodies begin to litter the streets of her new home town, she is reminded of a terrifying time in her past, a time that took her from the streets of the East End of London, to the rooftop of the world, the Himalaya’s, in pursuit of an evil that she thought long since defeated. With their friendship on the rocks and as Effie prepares to marry her new beau, it’s left to Brenda to save the day and finally bring an end to the reign of ‘The London Monster’.

While I’m more than a little sad that this series has come to an end, it’s done so in fine fashion with this gentle, captivating, enticing and exciting tale of jealousy, monsters, murder and the lasting power of friendship. Both Paul Magrs and Anne Reid have excelled themselves, the former in his role as creator and writer and the latter as the actress charged with bringing the delightful duo to wondrous life. This series has been an incredible adventure, and ‘Brenda Has Risen from the Grave’ has ensured that it’s bowed out with style, grace and on a tremendous high, and it only leaves one question unanswered. When does the nest series start? Fantastic stuff! Tim Mass Movement