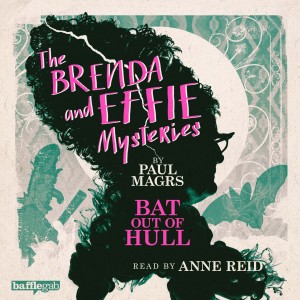 The Brenda & Effie Mysteries: Bat Out Of Hull – Starring Ann Reid, Alex Lowe & Chris Pavlo & Written by Paul Magrs – Download Only (Bafflegab)
Having been introduced to long-standing literary heroines Brenda and Effie in their initial audio adventure ‘The Woman in a Black Beehive’ and with formalities and initial pleasantries already taken care of, ‘Bat out Of Hull’ immediately drags you back to the weird and wonderful Whitby that they call home.

‘Bat out of Hull’ see’s Brenda and Effie falling foul of a former children’s television personality, his partner in crime and a large, slightly moth eaten and worn around the edges bat named Tolstoy. It’s a tale involving a foul mouthed puppet, the dark magic of old toy shops, life-long ambition, marital betrayal, rescue by Goths and a devious and dastardly plot to have the Great Puppet Hunt drag Brenda down to Hell, where according to her nemesis, she’s been expected for quite a while. Needless to say, it’s quite a to-do that our friends find themselves embroiled in, and one that it takes all of Brenda’s muscle and will, with a little help from Effie of course, to escape from.

Combing mythology and folklore with slightly surreal ‘Tales of The Unexpected’ style gentle story-telling and chronicled in a manner that feels strangely comfortable in the fashion of an afternoon radio play, ‘Bat out of Hull’ continues to build on the rock solid and near faultless foundation laid down in ‘The Woman in a Black Beehive’. The characterisation that’s central to the relationship at the heart of the story continues to evolve, and Paul Magrs perfectly captures the mannerisms, strange obsessions and dialogue of ‘ladies of a certain age’, seamlessly incorporating them into the unfolding events, which in turn allows Anne Reid to make both characters, but especially the amusingly aloof Brenda, her own. While the drama is a little Brenda centric (necessitated both by plot and narrative device), it still effortlessly draws you into the beguiling and enticing microcosm that both women inhabit (to the point where the town become the third character in the story and an unspoken and silent partner in their relationship), offering brief teases of Brenda’s past life, her existence prior to her arrival in Whitby and finally confirms her origin story. And as everybody knows, all of the best heroes and heroines have an origin story. An absolutely delightful instalment in what has already proved itself to be an enchanting series, and if there’s a better way to spend just over an hour of your time, then I’ve yet to find it. Take it away ladies… Tim Mass Movement