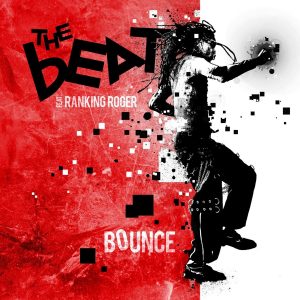 I nearly didn’t take this review, Bounce is The Beat’s first album in over 30 years and I feared this would be too big of a job for me. I’m not good with throwing superlatives around or smearing hyperbole all over the place, so I wasn’t sure I could do this justice. I also knew this iteration would be void of David Wakeling, so with that in mind and with a little trepidation I approached this with a genuine excitement and a lot of nerves…This is ‘The Beat’ for fucks sake!

As a nipper growing up in the UK in the 70’s and 80’s, The Beat along with a plethora of other bands from the 2 Tone Ska revival era have all had a long lasting effect on me musically.  I have very fond memories of wasting away the hours with one of my best mates listening to ‘The Beat’, ‘The Specials’, ‘Madness’, ‘Bad Manners’, ‘The Selecter’ the list goes on… So I was excited to be gifted this, would I find another Mirror in the Bathroom? A Too Nice to Talk Too? Or A Hands off She’s Mine?

Let’s find out shall we.

It’s almost like the last 30 years never happened when the opening riff to Avoid the Obvious hits my eardrums and has me out of my seat  Skankin, flailing around all while attempting to fashion a pork pie hat out of a random plastic plant pot. The opening riff is straight up vintage and Ranking Roger’s vocals accompanied by his son MC Ranking Junior literally had the hairs on my arms and neck standing to Rude Boy attention.

I continue tripping all the way through Busy, Busy Doing Nothing and the incredible Walking on the Wrong Side. Avoid the Obvious is going to be on constant repeat and Close the Door is just downright god damn dutty! All of a sudden mi life irie and I’m about to head to the closet to find anything black and white to wear when Family literally stops me in my tracks and screams wah gwaan…I didn’t have the heart to tell her yu green gyal!

Now that might sound harsh so let me try to explain myself, Ska can be a complicated dish to serve with its Caribbean mento, Calypso, American jazz infused rhythm and blues with its fancy syncopated polyrhythms but 2-tone, 2-tone that’s a little different. 2-tone should be a simple process, an unpretentious cake to bake, it should be one part Reggae, one part punk and one part pop, Reggae makes up the scrummy sponge the mainstay of any 2-tone cake. The filling is an edgy volatile mixture of cream and jam called punk and the thin, and I mean very thin, layer of icing is represented by pop.

So I’m not sure what happened when this cake was being put together, but while the pastry Chef’s back was turned someone shoved a fucking sausage in there! Now I’m no friggin pastry chef but I know a sausage does not belong in a cake! Just like Family does not belong on Bounce.

Now don’t get me wrong, and before anyone assumes that there’s vitriol in my words, Family is actually a very beautiful song in its own right, heavenly vocals with very touching lyrical content all, accompanied with some great plinky fucking plonky guitar but it’s out of place here and I have no idea what they were thinking of, or what they were going for by placing this on the album and it didn’t, and doesn’t, work for me! It seems like this track is purely here as the token song for the lover in your life and it left me a little confused.

However I had nothing to fear because the album was straight back on track after I had removed the offending ingredient and I was back skankin before the taste had even waned. Bounce was everything I’d hoped it was going to be and didn’t disappoint me and fans old and new are in for a treat right here!

So in the end did I find my Mirror in the Bathroom or any other genre defining tracks that challenged the days of old? Well, sadly no I didn’t but I did come to realize that these songs are from a different era, a different line-up and that’s where they belong.  I was left pondering was Bounce actually worth the 30 year wait? Let me emphatically state it didn’t take me long to decide that it’s a resounding yes, without a shadow of a doubt it is. Rude Boys are back in business!

Well like any review the conclusion is sample equation that basically boils down to this – Should you buy Bounce? Can I honestly recommend it and is it worth your hard earned cash? If you hadn’t figured that out by now, then the simple answer is yes. It’s a no brainer…But for god’s sake please keep the cake to yourself and give the sausage to your wife/girlfriend! Alan Wright